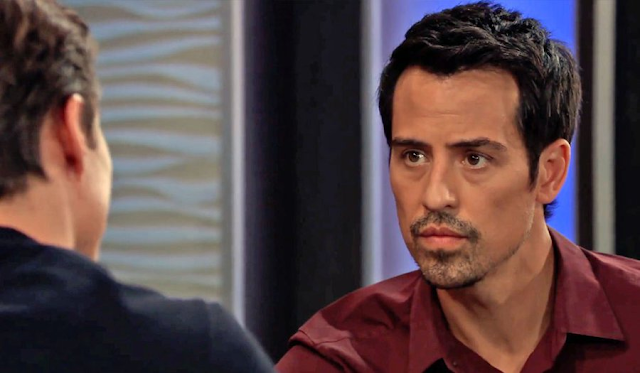 Spencer, Esme....Nikolas... he wants to know where Esme is from. She said "here, there and everywhere". Very evasive. Valentin walks up. He and Nik banter. Spencer joins his Dad's side. Esme is happy. Anna walks up. They keep arguing. Talk about how Valentin is keeping the Cassadine name but isn't really one. Yada yada. Anna drags him away,  Spencer tells Nikolas he will probably move back into Wyndmere.

Maxie asks Austin AGAIN to go to the damn wedding. Oh! a patient calls. He leaves. WILL MAXIE GET A DATE? zzzzzzzzzzz. Oh by the end of the show, Austin says yes, he'll go.

Phyllis picks up the phone MikeSon left when Nina calls. She says he's on the way back to the Tan-O. Nin says: Oh! He's here but we know it's PETER. ;eyeroll:  He says he figured out her plan and her Aunt is 'taken care' of and now it's her turn. yada yadaPeter makes her call Valentin about the baby--and he says nothing new. She asks him how room service is. Must be a clue. She hangs up. Peter isn't happy. Then, Phyllis walks in. Nina gives her some clues and Phyllis gets to go behind the bar and actually gets a GUN!! Pulls it out but Peter already is holding Nina with one.  Damn it, Phyllis caves and drops her weapon first.

Jordan is awake. Curtis acting like he loves her. Portia walks out. Shawn and TJ are relieved. OH! Molly arrives! Austin comes out and tells them all she's in renal failure. She's going to Albany for a blood transfusion/dialysis etc. MAC IS TAKING OVER!! wehooo!! Everyone says goodbye to her. It totally felt like she was leaving the show...geesh!!!

Ava arrives at Carly's "sorry, I know your wedding is today but it's important". She is leaving town and leaving Avery with the head of the mob. Oh! Ok! She'll be totally safe. Pffffffft. Carly says ok, sounds good.

Joss and Trina talking about Spencer and Esme while they make the favors for the wedding. Trina tells Joss that Victor was really Spencer. She's sorry she didn't tell her sooner.

Joss confronts Spencer at the Metro about being "Victor"

By kdmask - September 13, 2021
Email ThisBlogThis!Share to TwitterShare to FacebookShare to Pinterest