Boy I got it backwards yesterday ! LOL I was thinking COUNTDOWN..not countUP!

Anyway, we still have a hella long way to go until "Wedding Day". 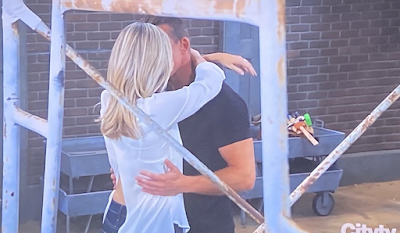 Jason and Carly are at a construction site, it's where Jake's used to be (and the Floating Rib)-- she was scared of her feelings she felt at the pool when they were dancing. Dialog about their past and feelings coming up. yada yada. Lots of Jake memories and early days. She says she fell in love with him back then and could do again. She talks about falling for him, then sleeping with Sonny and Jason leaving. How she bottled up her feelings after that. She talks about falling for Jason and she's scared she'll be alone in her feelings and then resent him, yada yada. He says "who says you'd be falling alone"?? OMG THEN THEY KISS. :) MAYHEM!!

Jax tells Sonny that he's not Mike and Nina knows who he really is! MikeSon says he doesn't want to know. Jax says he has a family--but MikeSon is like well, WHY DIDN'T THEY FIND ME? Jax says to Nina "WHY is THAT, Nina'?? MikeSon basically says to leave them alone and Nina begs him not to tell. She makes Mike leave. She tries to talk to Jax about meeting Sonny and finding him and why she hasn't told Carly. She says the world is better having Mike...not killer Sonny Corinthos. Jax looks at her like she's a lunatic (which she is). Jax explains she put terrible things into motion (ie: Carly in the mob/Joss in danger) and that PC could be better off WITH Sonny there. He tells Nina that Jarly is marrying "Tonight".

MikeSon throws his watch into the river.

Portia tells Jordan she has to tell Trina about her real Dad. Tries to get out of the basement. Curtis finds them...They have to get Jordan to the hospital because of her one kidney. OMG they make it to GH? From the FIngerlakes.. ahahahaa . OK!

At GH, Brook trying to set Maxie up with....Austin? Oh, Brook wants Maxie to have an "in" with Austin for the ELQ thing. Ned comes over, he can't find Leo.

Leo is in Austin's office with the spinner. Austin brings him to Ned. He talks about Leo's communication and they might want to see a specialist. Ned says he's noticed Leo is 'quiet" but Olivia won't hear of it. Austin encourages him to see a specialist.

Brook wants Maxie to invite Austin to the Jarly wedding.

By kdmask - September 09, 2021
Email ThisBlogThis!Share to TwitterShare to FacebookShare to Pinterest