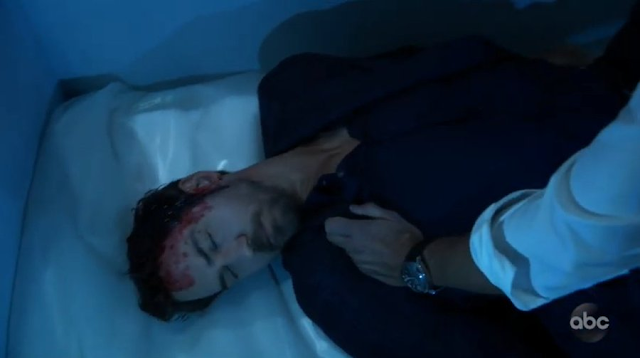 Alternative Title:  Peterscicle
OH We finally saw where they stashed Petie!! Although most of know that putting a body on ice can also let it rest to be regenerated later but I digress. I shall stare at this and hopefully know it's a done deal!
Grab a popsicle and join me!

Oh GH you confound me so!! I want to love you (and you know I do) ...and things go so well for so long then...you lose me. Right now I'm lost like that nurse down in a mine shaft. If this blog is all over the place it's because I feel all over the place!! 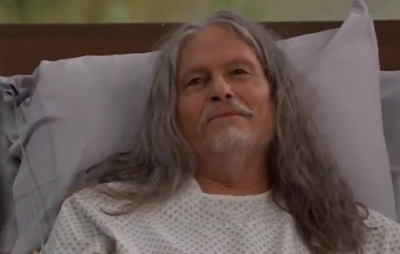 CLOSURE OF THE WEEK: Cyrus is wheeled away. Not until he tells sis' Laura he's awakened her "dark side" and made Finn realize he tampered with the DNA tests. Supposedly he's going away-away. BUT! Jeff is too good of an actor and Cyrus is too great of a baddie to be gone forever, imo. All he has to do is turn states evidence and he can get out. NOTE: Having Martin be absent for that last scene? Giant mistake. 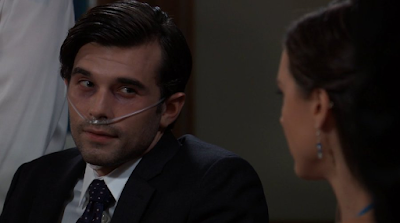 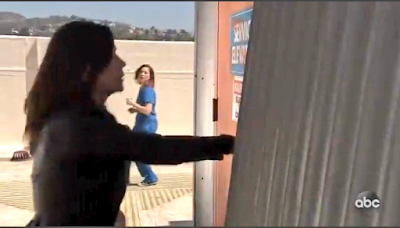 HIGH OF THE WEEK: Anna figures out that Ol' Peter might have either taken off in a helicopter OR gone into the sub-basement that was used by the naughties Helena and Olivia Jerome. Liz freaks out.. runs up, tries to be all casual about it but in reality looks guilty AF. Anna gives up for now but I bet not for long!! 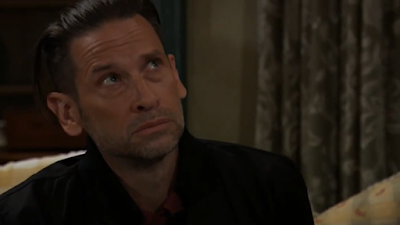 HOLE OF THE WEEK: Welp. Dante and Fran--I mean Austin find the hole that the nurse fell into. Is she dead? I say yes. Although they would have smelled her big time when they approached. Anyway. Austin is Franco is Todd. We all know he'll come to GH and give up his Pintrest Cottage. PS. Dante and he have more chem than Sam. For Sure. 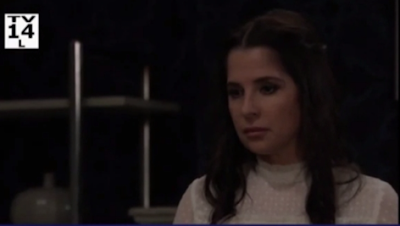 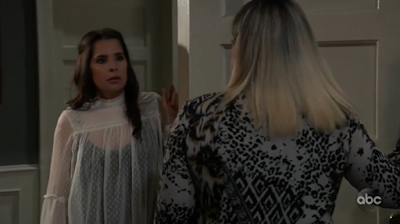 WARDROBE OF THE WEEK: Speaking of  SAM. Now, KeMo has said that she wears her friend Shanna Moakler line on the show. You can look that up. If that is NOT from her line, I apologize.   THIS is what her character wore to go talk to Maxie. THIS IS WHAT SHE WORE. Um.. when something is THAT distracting it doesn't work. Plus the fact someone needs a damn Vitamin B12 shot. That's all I'm saying on that front. 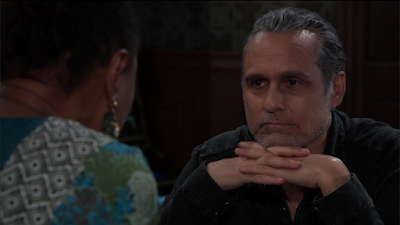 NIXON FALLS OF THE WEEK: How is our totally separate show going you ask? MikeSon is mooning over Nina and... Lenny seems to be forever in bed "resting". Maybe he'll die and Phyllis will move to PC and MikeSon will finally have his destiny; to run Kelly's. 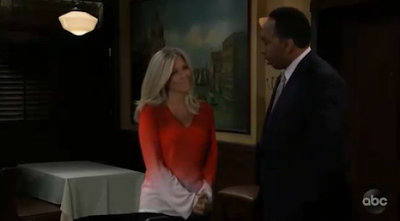 MONBULAR MESS OF THE WEEK: So, I'm in the middle of re-watching Peaky Blinders and although I realize GH can't begin to match that level of crime/intrigue --they could try a little. Carly taking over; check. Carly reverting back to being a screetching Grandmother about Wiley? Sad horn. Good to have the whole Jason should be the head of the mob because Carly 'is a woman' conversation. Carly being all jelly about Britt? Meh. Unless we actually get Jarly, don't care. 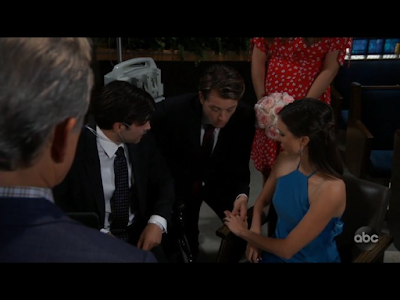 MOST SOAPY MOMENT OF THE WEEK:  Chase is too shaky to put on Willow's wedding ring and has to have MICHAEL do it.  I mean. AHAHHAHA. Anyway, you can see the gif if you 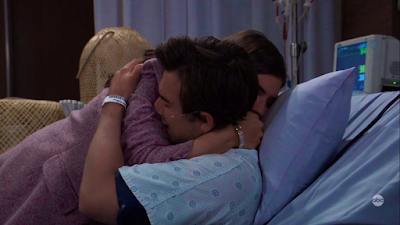 FAVE CHARACTER OF THE WEEK: Brook Lynn is just shaping up to be a great one. Depth and a storyline where she's not only falling for a guy, she's falling for a baby too. AND when she was with Chase? First time I felt a tug on my heartstrings. PLUS she's a Quartermaine !! If only she can marry Val and we can have a Cassa-Q pair. 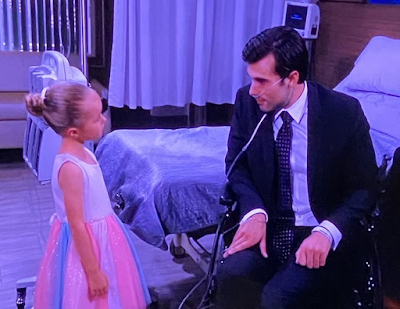 RAY OF SUNSHINE OF THE WEEK:  Is there anything she can't fix? 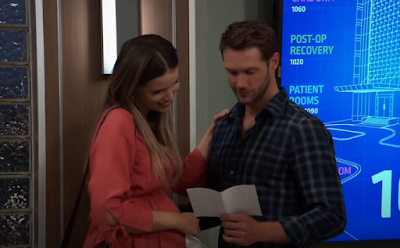 BELLY OF THE WEEK: Um, Sasha's more pregnant in 2 months than Maxie was in 12. She's pregnant IRL so.. 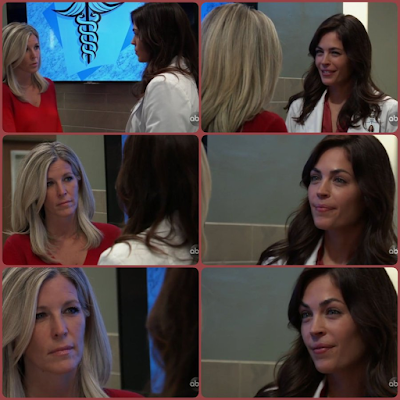 photo thx to @antigonea
JELLY OF THE WEEK:  Carly!! Oh Carly... you are way out matched by Britt. She's Faison and Dr. O's kid. Run, honey! 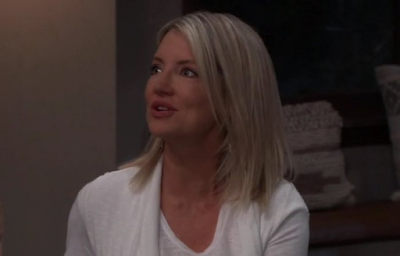 WUBS PREDICTIONS OF THE WEEK:   Carly will have to be "killed" by Jason to show he has strength. She goes to hide out. Where else but... Nixon Falls. Bonus points if Nina and MikeSon are getting married when she walks in.   Second prediction: Willow will be pregnant with Michael's baby. Chase will get better. Chaos ensues. 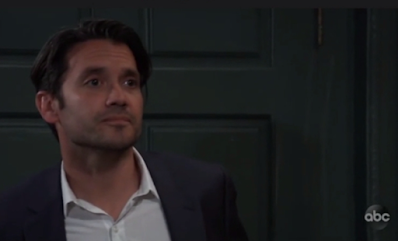 WUBS SUGGESTIONS OF THE WEEK:  The only way to save Brando's dull character is to make him be a traitor and have had been betraying the Corinthos' organization all along. Or let him move with Sasha to Oregon. Bye.  Dr. O and Scotty buy Carly's old house. Britta moves in because of her illness.  Lulu needs to come back; Martin needs to expand his role... and Val and Brook need to fall for each other. Dante has to have some direction and I wish Jordan would just leave. Let Mac take over. Get Spencer here SOON because the dance of the Ava threats is getting tired. It's not on enough to make an impact and the threats are pretty dull. 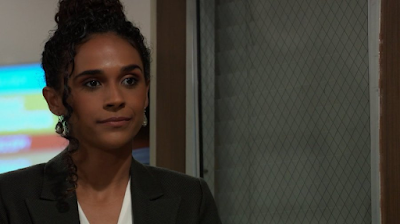 WEEK IN A WUBSHELL:
Jordan almost resigns but Laura talks her out of it.
Cyrus is taken to a federal pen--"never to return"
Liz flashes back to sticking Peter in a freezer in the sub-basement of GH with Finn
Anna's on the trail of finding Peter
Finn discovers that Gregory really is Chases' father; now the cure can come
Willow and Chase marry; Michael pouts
Jason and Carly have to figure out how to look tough enough
Sonny misses Nina; Nina Misses Mike-Son
Trina, Joss and Cam are all going to PCU
Austin and Dante find the hole that the mean nurse fell in
Carly's Jealous of Britta
Sasha and Brando get an ultrasound
Dr O tells Jason not to toy with Britt's heart
Dante is in the hole with a body
NEWS AND NOTES: BIG Gossip and almost confirmed is that Cam Mathison is paying DREW CAINE --- and.... people are having mixed feelings. 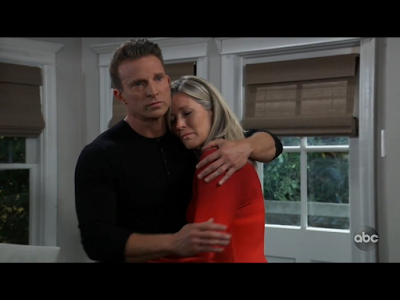 SPOILERS FOR NEXT WEEK:  Trina's grad party, the race to save Chase, Maxie sees Louise and  Jason makes a big mobular move.  See all the scoops on Diagnosis Daytime. 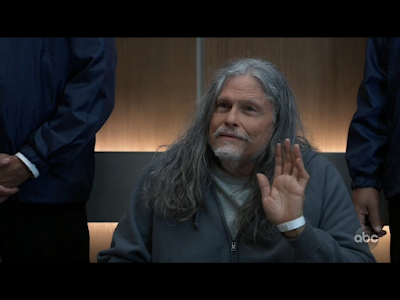 WELP! That's a wrap!! We lost 2 villains in a short period of time. That leaves a big hole. Also looks like Nixon Falls is still going to take it's time. Can Jason start wearing a suit now? Why is Jax still around? This week is my last week with kids. Then: SUMMER begins!
Have a great Sunday and as always, thanks for reading.
By kdmask - June 20, 2021
Email ThisBlogThis!Share to TwitterShare to FacebookShare to Pinterest