Friday and GH is on FIRE!

Carly IS BACK ON. DAMN IT. Visiting Jason in jail. Trying to get him out. She wants to know if he's talked to Britt.

YEAH!! DR O GOES to the cabin to help Britta!! whoo hooo!! Oh they are so cute. Dr. O wants to know allll the details about Jason. She says finally Britt has made a good match.

Jax and Olivia. Why? I guess they ran out of anything for Jax to do LOL ...I mean they talk about Wiley and..Nina?

Maxie, Baby and Brook and Val. awww. Valentin then goes to hold her. Says she's perfect. Seems ok with the name "Bailey Lois".  Then "Austin" Franco comesaround the corner. Brook is startled and hopes he doesn't recognize the baby. Then Austin looks for Maxie's room and sees a plaque that says "Michael Corinthos Pediatric Wing' and stops. Looks.

Maxie faints and Finn takes her back to her room. Willow comes in (??) anyway Maxie is just drained. Liz tries to tell her Peter will never be back. Dr. Austin walks in. Says he's sorry about the baby. He and Liz look at each other for a bit. 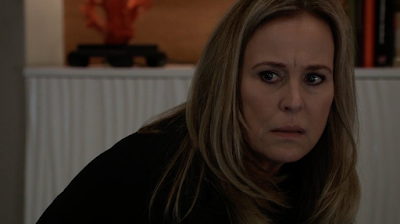 Cyrus and Laura. Jeff just keeps knocking it out of the park. Cyrus wants a car and safe passage. Jordan is going to get it for him. Curtis has other plans. You HAVE TO WATCH!! Really good scene and dialog. Yes, Curtis sneaks in the back window with a gun. Ugh he's going to ruin it.

OMG WATCH IT! I don't want to spoil it but I JUMPED!! REALLY GASPED!!  WATCH IT!!

END:
Everyone is recovering

Mildew has sex and someone sees them through the window

By kdmask - June 04, 2021
Email ThisBlogThis!Share to TwitterShare to FacebookShare to Pinterest