Lots of people on today!

Ned and Olivia talking about Brook's baby. She asks him to stay

Brook tells Val that Chase is terminal and she's crying. Ned comes and hugs her.

Willow tells Michael Chase is dying and she's marrying him. Aw, they are so so sad. 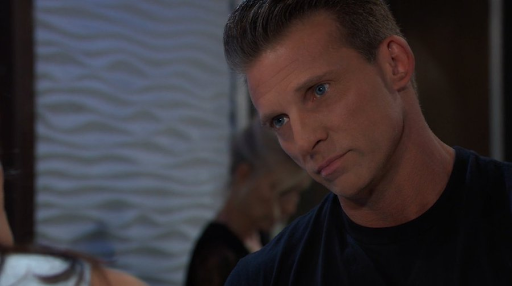 Jason is home. Sees Carly at the Metro; Britt is there too. (looking hot). Jason notices Britt is trembling. Says he needs to talk to her in private. They talk.

Maxie and Nina..Nina is so sorry about the baby. Maxie asks her why she was in Nixon Falls for so long. "Mike" calls and Maxie wants to hear the whole story.

Sam and Dante are at the cabin that the nurse held Maxie captive at. OMG it's Franco Austin's house. He says he owns a lot of property around "Pawtuck". Calls them city slickers. Dante asks why there is a hidden camera in the house.

Sonny and Phyllis. Since Elijah was arrested, their business has really increased. Sonny tells her she's his only family. She says he'll probably follow Nina now that she's in Port Charles. Phyllis tells him to call Nina. He does.

Ava and Nik are drinking at the Metro. They get up to do something and the bartender gets a smile on his face when he sees Ava left her purse. He gives it back to her at the table where they are eating.  Or Ava does wonders if Liz could be stalking Nik. He's like No... Then she  thinks it's Britt? DUMB. He goes to talk to Britt. Jason is nasty with him. Says he almost foiled the plan with Cyrus. Then Nik talks to Britt and asks about her going to the property in upstate and how did she remember that?

Austin gets a text about the emergency board meeting at ELQ

the bartender took the key to Nikolas' room

By kdmask - June 15, 2021
Email ThisBlogThis!Share to TwitterShare to FacebookShare to Pinterest