Back to Port Charles.

WILLOOOWW and Chase. Ugh ..at least Finn has a cure, I HOPE. Liz calls Jackie to come to the hospital. Big explanation about the toxin, Tiffany Hill...DNA yada yada. We need DNA from both parents for his immune system.  I think the point of this is to show that Chase isn't Finn's son.  They give him the injection and hope for the best. So, it won't work and then they'll have to figure out why and.... you know, DNA switch by Cyrus. 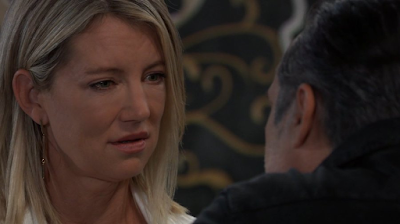 Jax blackmailed Michael into letting Nina see Wiley.  Nina has to choose between dimples and Wiley.  She's going to Port Charles. Sonny is sad.  Sonny says he'd go but he's sure that Wiley's dad wouldn't want him to meet a stranger.

Maxie and Anna. Anna says it's her priority in finding Louise and Maxie says NO! She says to be careful is all. Then Dr O comes in. Is concerned about her. Britt asks where the baby is and Maxie says the nurse kidnapped her.
Britt asks about the plan when they are alone. Maxie said it fell apart when the nurse drugged her.

Dr O tells Anna she's going to help find the baby. BUT FIRST they go to a "smash room" and smash up things. We have them in Rochester now. You put on safety stuff and just smash the crap out of things LOL The reason for it all is that Anna "lost herself" and in order to find Peter and the baby she has to find herself first.

Ava and Nikolas get a dagger in the mail. We all know it's Spencer. Yawn. Dante comes to Wyndemere and is saying it's low priority. Ava's all upset. "You'd help if it was someone you were close to"! Dante thinks someone might be targeting Nikolas, not Ava "someone who wants it him all to himself" .  Anyway, Dante tells them they are in danger-- and to split up and get off the island.

Chases' nose is bleeding and he passes out and seizes.

By kdmask - June 09, 2021
Email ThisBlogThis!Share to TwitterShare to FacebookShare to Pinterest