Helena Gets a New Boy-Toy! Other SOAPIE fun 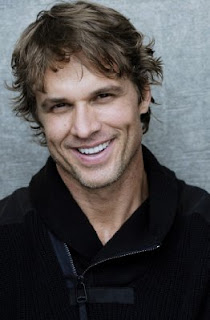 Branton Box is coming to GH To stand in as Helena's BOY TOY! Who remembers Landon Wine as the great Andreas? This guy is A LOOKER! woo...his name will be (ready?) THOR. ahahhahaaa.  He could be Jax's brother, couldn't he? Good news for Helena lovers as it means she'll be on longer!! MORE NEW SPOILERS are up!

There is a HILARIOUS Viral video going around that's a MUST SEE. It was posted on SoapZone and even though I know how it was done, it's still awesome!! Take a GANDER. It takes a bit to load but so worth it.

BYE to Scott Clifton on OLTL. SUCKS...sucks, sucks!! The ONLY way Frons can make it up to me is by hiring him to be on GH!

The show today:  First of all, I ate too many Red Vines and I think I'm going to throw up so if I leave, that's why. Dang Red Vines. My Vice. ; /
Old Face Morgan walkin'!! His headmistress looks scary!!
Sonny gets his sexy dimples in Claire's face! I so don't want them together...I don't like her. Too milktoastie.
Maya Ward meets Lizzy...you'd think she'd take a day off after coming back from Shadybrook. Or work parttime just doing bedpans? LOL.
YEAH Tracy and Carly! Nice.
Er...Ethan needed to wash his face. Gross.  LUKE CALLED DANTE A PIG!! wow!! When Luke gets mad, watch the hey out!!
Great acting week for everyone on canvas..eh? Nancy Lee Grahn especially. Loved her the whole way through.
OMG, Ronnie taking Morgan like that is totally illegal! I don't care if they DO have a social worker there. Uh, can't happen. Diane is totally right on this. And can Sonny really approach the prosecutor like that? LOL
I do think Dante was sitting on some animal print chair at the PCPD today!?
OMG --:LULU and Luke are PRICELESS-- "family"?? take "Family" out of those quotes. She brings up Lucky being a cop, he says he's only a cop to piss him off.  Heh. Loved Tracy's face after Luke yelled at her. JMB can hold her own with TG, that's for sure.
Did I tell you I just found out Franco is in DATE NIGHT? ;/ grrr. Glad I found out first before I started throwing stuff at the screen! LOL. he's HAUNTING ME!! 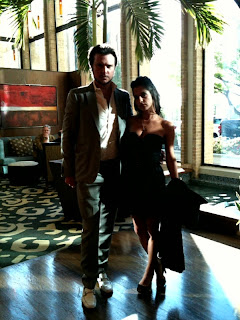 Kelly Monaco attended the premire of Skateland in TX with Heath Freeman.
He tweeted all about it!  She looks faboosh. 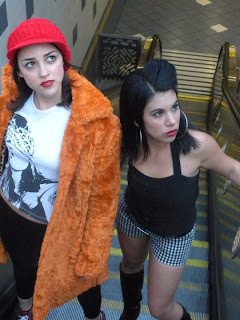 WOOT! New Subpranos video on youtube. Chrissie Fit (Mercedes) is hilarious. Please take a gander!.
See you later this weekend. I should do another NuFace Wub if the spirit moves. I am also going to Daytime Confidential's' podcast! I'll record this weekend and let you know when you can listen to me!! DON'T forget that ALberta WUBS is on the ROCK the Soap Cruise, so I'll be getting her photos up when they come in!!
By kdmask - April 09, 2010
Email ThisBlogThis!Share to TwitterShare to FacebookShare to Pinterest