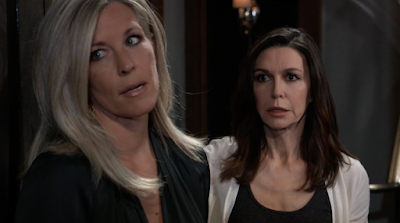 Another week of wrapping up The Peter Story (or so I hope)?? Please be setting this up for his death. PLEASE!! Everyone is talking "Justice" for Peter. Let's hope it's at the end of a long spear.  I did watch the end of Friday's show finally so I'm all caught up.

Good cast movement and dialog made this week stand out a bit more than the others. Join me in a nice ice coffee on this Easter Sunday. I have brunch to get ready! 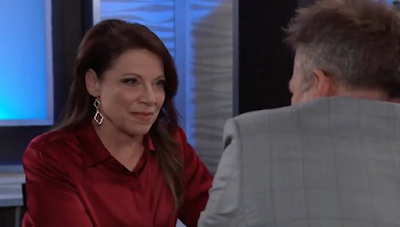 COUPLING OF THE WEEK : I'm staring off with my fave part of the show; Lesil and Scotty!! :clapping: Although Laura might not approve, I love them together. Scotty needs a love interest and so does she. Of course she has an evil past but she's the "nice" evil we cheer for (at least I do!!). They've done a great job making her character multi-dimensional over the years as well. Anyway, I enjoyed the talk about Franco and the whole "Come up and come on in" at the Metro. 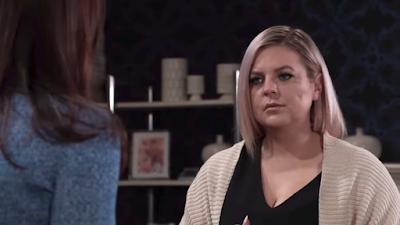 ETHEL AND LUCY OF THE WEEK: Oh lord. Maxie! You want to fake a dead baby?? Seriously? You don't even see your one daughter enough and now you're going to hide another one? Maybe if Spinelli were in on it I'd feel better. He and Ellie could hide her out somewhere. I do like the Britt angle and love how she knows all about Peter's business like the teddy bear Faison gave them as kids. Many people are speculating that Brook Lynn will have a hand in all this too because she's actually faking her pregnancy to get Valentin to cop his shares of ELQ. I have a sneaky feeling this plan may fail miserably. 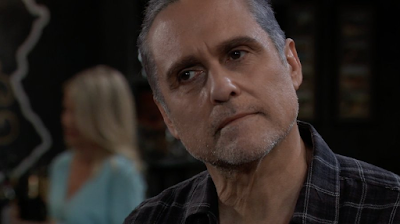 SAM AND DIANE OF THE WEEK:  OMG, that's all I could think of with Nina and Sonny. Sitting at the bar in "Cheers"...although without the humor or drama. The dance was ...um, interesting. And why the hell doesn't Elijah know who Sonny is? We need to teach him Google Face recognition. 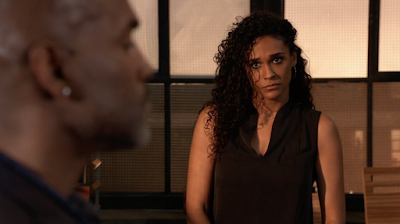 THREE'S COMPANY:  Yep! Taggert, Jordan and Curtis all standing around not quite sure what to do with each other. I personally liked Jordan and Taggert together and found her more awake then ever in those scenes. 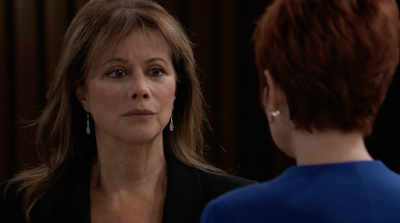 LAW AND ORDER:  Alexis sticks to her guns and pleads guilty. Dante does a fine job trying to minimize her part in injecting him but the judge still sentences her to 3 years in Pentonville. Now, will she see Jason there? He's off to visit the pokey too! 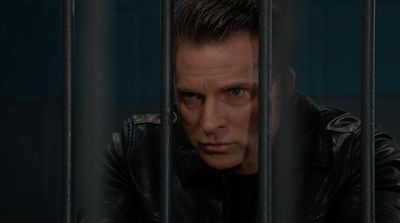 LAW AND ORDER ORGANIZED CRIME UNIT:  Oh, poor Jason...even with Robert the DA on your side ya lose!  Judge does think you are a flight risk (given you've been arrested 177 times) and there's no bail for you! Peter is happy. He probably paid off the judge. Funny how you didn't get offered an ankle monitor like Taggert did. 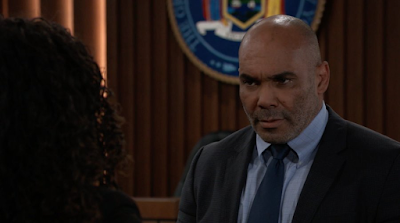 LAW AND ORDER SPECIAL VICTIMS UNIT:  Taggert was up against a judge this week too! WOW, cast extras for judges was through the roof!! He got an ankle monitor and Jordan said she'd be responsible for him. Trina was thrilled. 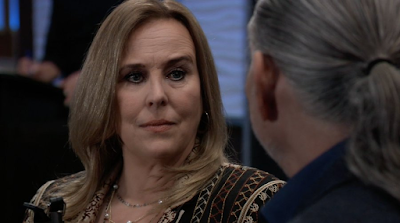 ALL IN THE FAMILY OF THE WEEK : Ouch...Laura dropped Martin like a hot potato after Cyrus told her about his dilly-dally with Julian. You're sneaky! NO Easter Dinner for YOU! Plus, she played right into Cy's hands by cutting Marty off. Oh, Laura. 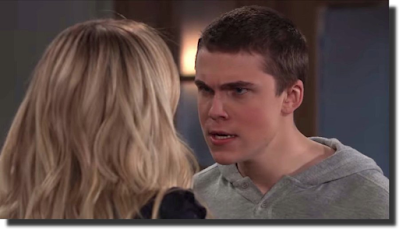 BRADY BUNCH OF THE WEEK: Marsha, Marsha, Marsha! Cam and Joss arguing like Greg and Marcia was pretty funny. Joss comes off as the "right" one here and Cam the jerk for not thinking Jason could be innocent. LET'S review the evidence, shall we? You mother says she saw him, he's a known killer in town, he hated Franco and...he's arrested on evidence. Why wouldn't you reach that conclusion???? Everyone is treating Cameron like he's nuts for thinking Jason could actually, you know, kill someone :eyeroll:

BREAKING THE FOURTH WALL OF THE WEEK: Ok, so technically it's not, but seeing Laura and Wes together was something. Of course, I was hoping they'd run off together but??  AND I have to mention Carly's courtroom outfit. WTH? She's been dressing normal lately and decides to wear a fire-engine red cocktail number? Weird. 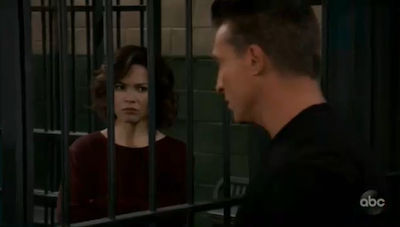 SCENE OF THE WEEK: Loved Jake giving Jason the painting of the Woodchucks Baseball Game. Plus, Liz watched Jason tell him he didn't kill Franco so... hmmmm.... Is she reassessing the situation? 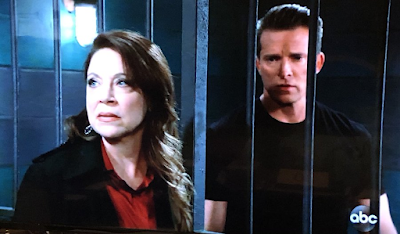 Anna, Carly and Valentin have a set up for Gladys and Peter

Valentin tries to get Gladys to talk ...by using a lot of gin

Taggert gets an ankle monitor and a minder; Jordan

Jason doesn't get bail and has to go to Pentonville

Speaking of, Alexis is sentenced to three years in the same place

Dr. O is going to help Jason get out of jail

Carly freaks out about Jason going to jail

Cameron freaks out that no one believes that Jason killed Franco

Liz and Jake visit Jason in jail; is Liz wavering on her guilty decision now

Michael thinks he could take over the family business. Everyone laughs 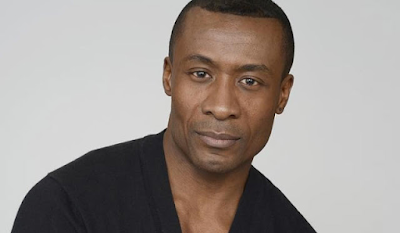 NEWS and NOTES:  Sean Blakemore returns to GH to play Shawn Butler who's been in Pentonville serving for a murder he did not commit. Speculation is that Jason runs into his old pal while locked up. Shawn also knew Alexis.

SPOILERS:  What will happen on GH This next week? Ava gets another package, Laura tells Cyrus no and Brook Lynn wants to help her Dad and Olivia make up. 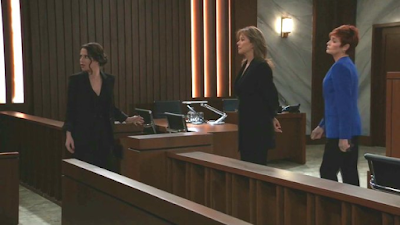 WUBS LAST WORDS:  (Just for this blog LOL). Happy Easter if you celebrate. My whole fam is vaccinated so we are getting together. All 6 of us. LOL. The show this week was all about the courts and justice GH Style. Nothing has rhyme or reason. One gets an ankle monitor, the other gets no bail and one is off to Pentonville. What will Alexis do for 3 years? I think we are going to get the "Alexis" Special while she's in there. People on Twitter and FB seem to love Scott and Lesil. You know I did. She's such a great character. Having Jake on was also nice; dynamics between he and Cam are needed. Carly seems to be in every story and scene lately. Can't she go on a much needed vacation? After all she has a toddler, a business, the mob to run and now her bff is in jail. Time to go to a spa.

By kdmask - April 04, 2021
Email ThisBlogThis!Share to TwitterShare to FacebookShare to Pinterest