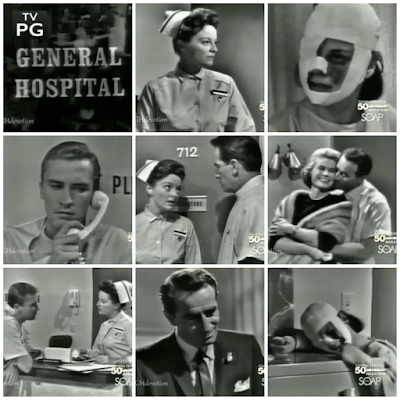 HAPPY 58 YEARS OF GH! It launched on April 1st!

Jason and Scotty... he's yelling at him for killing Franco. Dr. O comes in and tells Scott it was Peter. She tells Jason she is going to help get him free. "Frankly, you're lucky I am on your side" LOL!!

JAKE! Wants to go see Jason. He says Jason wouldn't have killed Franco. Cam is like, you're stupid LOL "HE DID"!!! Jake asks Liz if she thinks Jason did it. She says people in this country are innocent until proven guilty.

Britt and Maxie still talking about how to bamboozle Peter. Later Peter knocks on the door. Damn it. He gives her his childhood stuffed bear he's had since living with Faison. (barf) Maybe it has a camera in it? Britt tells Maxie Peter lied about the stuffed bear and his adoptive parents didn't give it to him, Faison did. Maxie drops it. (Peter left)

Nina asks Sonny why he hasn't tried harder to find out who he is. He says no one seems to be looking. Thinks his former life was complex, he likes it simple now.  Elijah Crow is at the bar too...Sonny introduces him to Nina. Nina says she knows Phyllis but just met Sonny.  Elijah wonders why she wants a story on Nixon Falls and will give her the insiders tour of the town.

Lesil and Scott go out for drinks. She thanks him for putting her up when she was in hiding. She also says she's sorry but it's her fault Franco is dead. He says it's not and asks if he can walk her to her room. SQUEE!! yes!! She invites him in and Scott says YES!

Jake goes to see Jason and gives him a big mural of the baseball team they saw together.

By kdmask - April 01, 2021
Email ThisBlogThis!Share to TwitterShare to FacebookShare to Pinterest