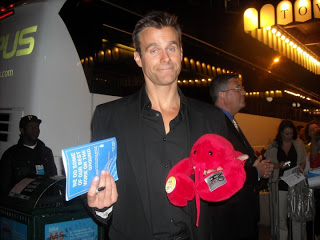 YEP!! No word on who he's going to play but word on the Tweet is that he's a Drew recast??

Kevin and Laura . They talk about Cyrus and how he outted Martin about the whole Julian thing. Kevin leaves. Cyrus comes by later.  He tells her that with Jason in jail if she doesn't help with his mother, any war will be on her hands. Nikolas comes up and slams him against the door.

Carly and Valentin talk about Jason and Peter. She also tells him he has to get closer to Gladys. NOW.

Gladys and Brando are going to eat lunch at the Metro. He's talking to Sasha first. He tells her that Dev wasn't his son and why. She wonders if Michael knew.

Valentin is at the bar. Gladys saunters up and is like "'member me"??

Ava at the Gallery. Nikolas is looking concerned. Spencer isn't answering his phone calls. "He's almost graduated" says Nik. WELP! They going to age him? Martin walks in. "You're my nephew"! Nikolas tells Martin he knows what he did to help Julian. Ava wants to know.

Olivia tells Brook she can't have sushi. Brook Lynn gets mad...they end up fighting a bit and the sushi falls to the ground. Ned walks in.

Willow talking to Chase at the Qs. He wants to work things out with his family. She matches the drapes LOL. Then Michael and Willow talk. -- about...WILEY. zzzzzzzzzzzzzzzz.

Nikolas slams Cyrus into the door when Cy threatens Laura

Willow and Michael almost kiss and Sasha walks in

Ava opens a package up and it's a FAKE RUBBER HAND. I'm callling it and saying it's Spencer is doing it.

By kdmask - April 05, 2021
Email ThisBlogThis!Share to TwitterShare to FacebookShare to Pinterest