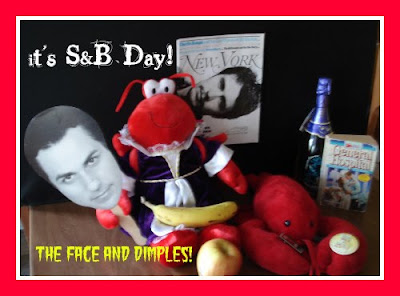 OMG...are you batting down the hatches? Getting the windows boarded up?? Have your FRUIT all arranged?? Today's the day! It's only been...er...let's not say it, but it's been FOREVER since VMG came back and Sonny finally meet up. JUST on the day hurricane Earl smashes into the coast. Coincidence?? I think not.

SO, at the start of the show...Brenda runs into SINCLAIR's arms...not Sonny's. Heh. Okay, then, Sonny turns around and meets up with newbie Sophia. LAND OF BAD ACCENTS. good gravy.  ugh...what torture. Brenda goes into the hotel with Sinclair and tries to give him A PEAR. What is with the  FRUIT  lately?? WASTE OF MY TIME!! The only way I'd like that older lady is if she stands up and bites Sonny on the damn neck and is really a vampire. LOL

In the meantime, both Sam and Carly are all trying to get the dirt on "The Face" because they know Brenda was the UBER CHICK in Port Charles.
There's a newbie girl on GH, called "Ali"... who looks a bit like Tams Braun to me. I guess she's supposed to make Michael uncomfortable. heh.

so...they finally saw each other, last 10 seconds of the show. Now you have to wait until next Tuesday for some more S&B action.

A FEW new spoilers are up. Looks like Claire and Sonny will hit the sheets. SO STUPID, imo. So stupid. I wonder how S&Bers feel now that Brenda is finally back and before she even gets to PC,  he sleeps with CLAIRE!! HURL!!!
By kdmask - September 03, 2010
Email ThisBlogThis!Share to TwitterShare to FacebookShare to Pinterest