Sunday Surgery: The EYES Have IT!

Well....the week was, a bit "weak" as they say! I know we have to have lulls but lordy, this was a long one. Another day player bit the dust though! Bodies are just piling up on the extras list over there.

Of course, this week introduced us to THE EYEBALL NECKLACE...the great invention of Sir Spybot Franco. And Carly, natch put it around her neck like an idiot. I think Josslyn would even guess there's a camera in there.

Let's have some EYE-Opening Bloody Marys and a MUFFIN like the one Maxie tore into at the Brownstone.


Liz sat shiva at St.JaseFace's bed on a daily basis. My hope for any kind of NON-Formulatic soapy goodness was DASHED. *sigh* She feels drawn to the mysterious stranger--Epiphany even says "He's had so much plastic surgery not even his loved ones would recognize him". SO, there you go. Then, Danny runs into the room to hold his hand. Sam walks in..she holds his hand and his heart races. BEEP BEEP... you know she'll help him with his memory-- and let's face it (face it, ahahha) it will be months before he's discovered to be THE Jason. That's when the clouds will part and angels descend.  *sigh* PS. who's paying for all his recovery anyway?
MONICA walks in!! Of course Monica walks in-- and Sam on the plane "I can't stop thinking about John Doe in the ICU"
Pffft. That made me LOL --

Franco's trying to catch Carly and BOOM! Mission accomplished. Carly wears the ugliest bauble ever seen (and ALL DAY EVERYDAY).  Franco discusses it with Nina who tells him he's going to go 'really over the edge' if he keeps it up.    I do love an angry, scheming Roger Howarth so it should be good for a giggle.

Fun Dialog from Sonny/Carly:
"We've been married FOUR times!! and he mentions Limo Sex" LMAO
"We are stronger together than we are apart"...
"I spent the afternoon having sex in my son's apartment--and my fiance has no clue"
(Um...whoops, yes he does thanks to the necklace you still have on. Did it hit Sonny's nose during sex? I mean, geesh)

Tracy--OH Tracy. I have no words for this. The entire Fluke thing is so flat..so boring-- and she's so stupid I just can't anymore. Zulu, Sam...Dante, Anna, Patrick are on the "Luke" trail. Patrick and Sam are off to Amsterdam. Cute on the plane, yes.

Which brings me to: JaSam vs Liason. When there is a recast, all bets are off on soap couples. Sorry but it's the truth. You have NO IDEA how a new actor is going to chem with other people. Case in point: Laura Wright. I don't think I could have ever watched Sarah Brown's Carly with Jax, but Laura's was perfect.  ERGO, I don't know who Billy's Jason will mesh with. Super couples are made by the people who play them, NOT by the "characters" imo.

What else happened? oh yeah, Super-aim Micahel kills Kobe after Kobe rushes in to murder him. Rosie was in the apartment and freaked out. She did a GREAT job looking frantic and panicked, imo.  Loved how Sonny's idiot people didn't get all the blood up when they carried him out in a TARP. (geesh) Kiki saw it--and Michael was like "yah, I plugged the guy". Shrug. Which gave she and Morgan even MORE to talk about.

Speaking of Morgan, he had a houseguest. Ava plopped down and decided to hide out. She gave out all the info on Sonny killing AJ-- which made Kiki's eyes pop right out. She wants to tell Michael, he wants her to keep it secret. So, not only is it a secret, it's a secret being KEPT by people that "love Michael". Double naughty.
*sigh*

Julian and Alexis had giant sex. Sonny, the PERV waited in the living room until it was over to confront them. Said Julian sent Kobe to kill Michael.  Alexis got all Cassadine and was pretty good at yelling while her robe and chestaloons keps popping out. Of Course, Julian was like: WHO ME? (insert Alfred E Newman face). Sonny won't believe them though!

Maxie..Maxie. WHAT THE HELL WAS Maxie doing this week? COME ON!!!! That much time spent on deciding whether to go on a date with Nate? :hittinghead:  And..she decides to have a full on BFF discussion with..MOR-GAN.
HUH?
Morgan? Why? Who? Um.wha? I realize Lulu was busy but hell, Molly would have even made a better choice. WEIRD. WEIRDDddd WEIRD.  Then, she goes to Lulu and what? Says the SAME DAMN THING over again.  But, in the end, she shows up way late looking chic getting off the Metro elevator. awwww.


PS.
Dante cooks the biggest spaghetti bowl ever!  Who's gonna eat that? Not Lulu! 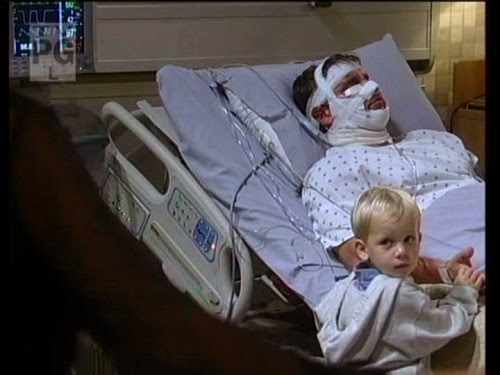 SCENE OF THE WEEK:  I had to go with this-- just because the kid was so cute. My fave part was when Liz bribed him with a sucker to let go. LOL. Fickle, fickle!

PROP of the WEEK:  EYEBALL EYEBALL-- good lord.  HELLO to the EYEBALL

FACE OF THE WEEK: Rosalie had a million of the best faces before, during and after the shooting.

There ya have it! St.JaseFace is waking up--that's how Friday left us. Brain Scrambled again. That guy should have the cognition of a toad by now. LOL

Hope it's nice where you are. Time to rake the leaves!
By kdmask - October 05, 2014
Email ThisBlogThis!Share to TwitterShare to FacebookShare to Pinterest