DOCK FIGHT! Yesterday's Tracy and Helena scenes were so funny. Loved it.  Hey, this is the only time you'll see Sonny dressed as a cop. LMAO

NUSlone is on... Julian is arrested. He tries to tell Slone that Ava is in the river.

OMG..So, Jake tells Sam the bomb is on the boat. THEY ARE IN THE PCPD. What does she do? CALLS Patrick! yes! Does she yell to the cops to call the coast guard? WTF? NO..and Ivy has Nik's phone and won't answer it. No answer. SO? What does she do? She calls Lucas then hands the phone to Jake. Who TELLS them where the bomb is.
Do they yell?
No..THEY GO FIND IT BEHIND THE BAR and stand there. LMAO Then, Michael runs out!

Meanwhile, LULU finds out Dante is at GH and STANDS THERE, MOUTH OPEN.  DUHHHHHHH. SHe finally runs.  Goes to Dante's room. Dante tells her about Fluke and the dead guy in the basement of the house. 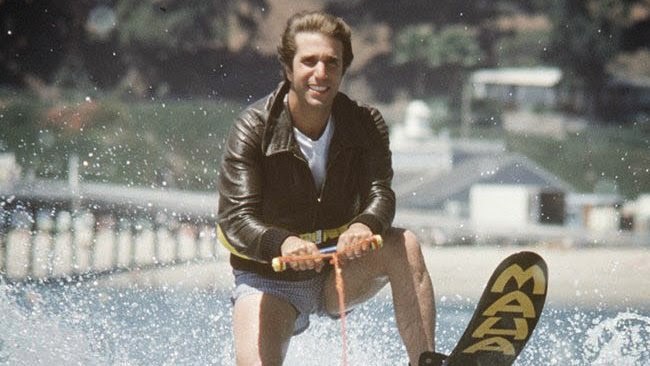 Sonny talks to Fluke for AGES. Then he goes to save everyone on the boat! He gets the bomb from Michael and JUMPS OVER WITH IT! Sonny didn't THROW it...he Jumped with it LOL. That's him up there. Jumping the shark
Oh did I say that??? LOL
You didn't think that Sonny would pay for murdering AJ for long did you? Michael is all "MY DAD saved us" Boo hoo..wah wah... Yah.

Later, (after Sonny leaves) Nate has Fluke at gunpoint--and MICHAEL jumps out of nowhere and Fluke gets away.

Franco injects the LSD and it takes an age to kick in. Good Lord. Then they kiss..LSD Sex coming? No he starts hallucinating.
I just can't.  UGH...like a Peter Maxx poster.
The police got in there and he was all nutty.

AT the endish--Patrick bursts into the interrogation room and tries to strangle Jake. LMAO


You know, I seriously do NOT understand why Soaps can't be shot/filmed like the dramas that are now on TV. They still look like they are made in the 70s with the same editing, lighting...and the suspense?
Um NONE. LOL.. That bomb thing was painful.
OY

By kdmask - February 04, 2015
Email ThisBlogThis!Share to TwitterShare to FacebookShare to Pinterest