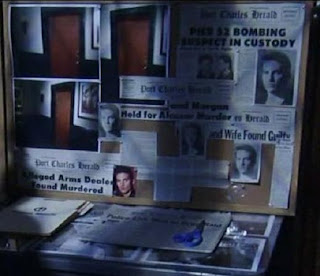 I'm sure Shirley over at GHH will forgive me if I gush about her idea to blow up the newspaper clippings in the "Mad World" montage! Take a gander! Looks like it has to do with ALKAZAR--not the whole Pauletti thing I had heard about. GENIUS idea to do that. Ergo, the code must have to do with Alkie somehow. I guess Mr. Franco also looks a tad like Mr. A. So, although the part about father/son was correct, I do think this is the way the story is going.
UPDATE: "sonnyandbrenda" on twitter had an awesome idea. Brenda clues are also in those newspapers. She had a hand in the whole Alkazar thing. There are railway maps of Europe on there (where she is now). PLUS, Vanny mentioned to her friend she wanted to come back on GH to work with James Franco! So, who knows?? BTW, will he also go after Alexis who killed THE OTHER Alkazar? hmmmmm.
Many charity events this weekend both on the West and East Coasts. Daytime/ABC cast members helped refurbish schools. Wubber Chrissy said she had a blast in NYC with members of OLTL. I will have pics from both coasts by tomorrow I hope. It amazes me the charity involvement in the soap community--very cool.
Bradford Anderson had an event in Atlanta yesterday and gave out roses to the people that attended!
Chrissie Fit (Mercedes) is looking for a Halloween costume. I told her to go as a Wii Fit! :) how fun is that!? Did you know she was in the movie "Crossing Over" with Harrison Ford and Ashley Judd? Catch it on DVD!
GREAT Spoilers for next week will involve Claudia and Joey Limbo tangle, Johnny tries to save his sister and Liz tries, but fails to sleep with Lucky. (guilt?) Sonny will have a nasty toast for Claudia at her party. Guess who finally ends Claudia's life? Kind of like an EYE for an EYE....if you do get on the spoiler site, please just hit a sponsor or two. I'd appreciate it!
****** NEW ENTERTAINMENT WEEKLY***** Lists "CougarTown" on their Mist List as #1 to Watch--and mentions "Scene Stealer" Carolyn Hennsey!
PS. Shilo the "Mermaid Girl" lost her battle and has died. She was one of my most favorite people. Anyone that saw the docs on her fell in love with her spirit. I feel so badly for her parents.
By kdmask - October 25, 2009
Email ThisBlogThis!Share to TwitterShare to FacebookShare to Pinterest