WOW: Another NOT Miss One Life to Live Day

Go to TMZ "Celeb Scramble" to figure out who THIS COULD BE!! heh Thanks to @babysarms for this.

OLTL Had a nice crank a boom-boom Guza style...but with more extras and no hose blood-transfusions. LOL. I do like the Destiny story too. Next can be the Mama Drama!! I was shocked about the Shaun thing, then about the Greg murder thing--Squee!! And this is MONDAY?!  Today's show: (Spoilers) Greg admitted to killing Destiny's real mother, Cole shot ELI, Starr knocked out James by mistake--the roof's collapsing in on the warehouse.
(from twitter)
@JBernardJones: #oltl Frank Valentini needs to hold seminars titled How To Produce A First Class Looking Soap W/o moving 2 A New Coast. 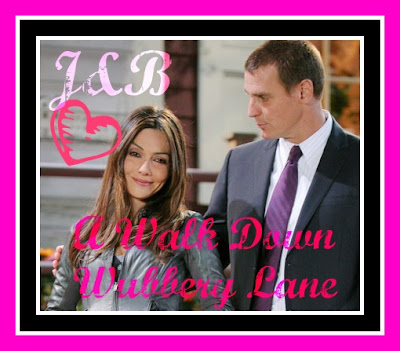 GENERAL HOSPITAL: I think the J&Bers will be happy with the Jax/Brender walk down memory lane. Or WUBBERY Lane. Heh. WUB WUB...those of you that know the Wubs, know that it was their Wubba Love that started the whole thing. Ahhhhhhhh. Such a sweet love they had. Remember  when he brought her movies/popcorn machine? That was a banner WUB day.


Brenda and Lulu. At least they are going over some history with Brenda. Of course, Lulu was about 5 when she left. Going Ice Fishing.

Why the hell would Sonny ask Dante to make Brenda's life more comfortable in PC? RANDOM.

CAN ANYONE understand stupid Sioban?!! You know I sit here and make fun of her. Heh. They had her say "Get bent out of shape" which isn't in character. Why do they over do the dang accents and under-do the slang?!
Liz has to tell Lucky she wiped out the boyz bank accounts because of her stupid DRUG investment. I bet Helena has something to do with that!!


Monica was on!! I Liked her playing along with Luke-- heh. Although I'm not convinced that Tracy doesn't know what's really happening!! She's being too nice too soon!!

Who's watching Michael?? Let the parole board know.  And NOW, Claire thinks it's a good idea if Dante also watches Brenda!! LMAO!! I give up.


EMMA is missing PROMO on ABC.


RUMOR DRAMA: What recent shake up on the #GH Set has many people wondering what/who is next!!? Things might be changing from the outside in!! Why is a certain someone walking...nay Running?! More tomorrow once Gedstern gets it sussed out!
By kdmask - October 25, 2010
Email ThisBlogThis!Share to TwitterShare to FacebookShare to Pinterest