Franco, Scott...Liz.. extortion of money. Liz is too good for this LOL neener. Roger looks like he's having SUCH a fun time. I swear.

Britt and Nik! They look pretty together.

Julian and Ava. She tells him about Ryan.

Alexis, Olivia and Ned awkward ... Olivia tells Ned she saw Alexis drinking and is that why he helped her. He's like SURE SURE!!

Why is Gladys back? To throw in with Cyrus? Oh, then they set it up to look like Brando is mad at Sonny and will go with Cyrus.

OMG Lulu's face and then Dustin has to come in all NEKKED. Damn it. Oh they got me with the gun!! And Dante's on Meds!

SUCH A GOOD SHOW!! I loved it. Watching on Hulu helps LOL No commercials 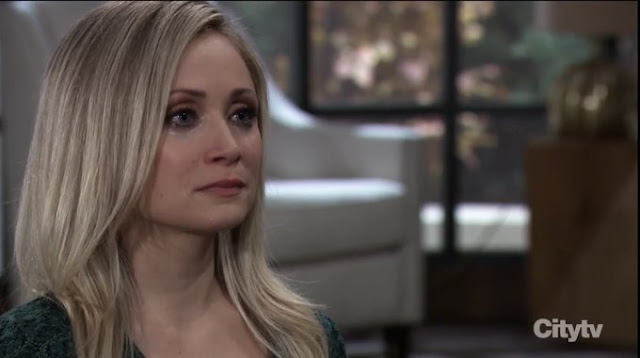 Anna thinks Alex is going to kill her and it's because of Peter. She tells Finn she's going to lure Alex to PC with the help. Finn freaks out. What about Violet??!!  He says just tell Peter that Alex is her mother. She's like NO.

Maxie and Peter. Britt comes in lol!! "I'm helping to cook that bun in your oven"!! OMG I forgot Britt is Peter's sister. LMAO. Britt is the doctor. There was no Huntington's Disease found on the genetic testing. Some Rheumatoid arthritis markers but that's it.  He's all "I don't know if I can do this". Maxie tells him how much she loves him and he's helped her and asks HIM TO MARRY HER. (I barfed)

Brook isn't telling that Amy is singing the song. Oh and Valentin sees Amy there in the hallway. Hmmm....Sasha looks like HELL! WOW..Lucy says "road kill"... it's the Deception meeting/greet. The lady comes to the meeting. Sasha is cleaned up. Then she starts the presentation and she messes it up terribly. Shakes, says stuff wrong.  Then she tries to pitch it again.. saying 'she's imperfect just like customers".  The buyer says that was good but she wants to hear Brook Lynn's song.  The computer won't work to play the recording so Brook has to sing it "live". WHOOPS.

Ava tells Ryan she has a counter offer to her offer. She says she's blackmailing Nikolas and that she will give Ryan money. Ryans' like" Um, that doesn't help me. She says: But don't you want to make me happy? Bats her eye lashes. Ryan doesn't care. He saw Nikolas and knows he cares about Ava. He says to BRING HIM THE SIGNED divorce papers OR ELSE!!

Jax and Nina talking about Nelle..blah ..she feels guilty because Nelle lost Wiley because of her, yada yada.

Jackie and Chase. She wants to meet his girlfriend. He tells her he broke up with Willow and he cheated on her. She says to patch it up. He says he can't. They talk a bit more and Chase says he wants Finn and Dad to be civil again.  She's like Leave that ALONE. LOL you know she and Finn had a history.

Martin Gray comes in and tells Julian Nelle's body is being released. Julian is her next of kin so he's responsible for burial. Jules says "put her in Potter's Field" ahahahhaaa. Nina overhears it and decides to bury Nelle. Julian is like: Fine, take her.

By kdmask - October 13, 2020
Email ThisBlogThis!Share to TwitterShare to FacebookShare to Pinterest