ALEXIS AND NED wake up..clothes all over!! Ned's hungover ..so is Alexis. LOL.. WHOOPS . Ned's like: Um, way too much scotch !! They agree to never mention it again. He leaves. 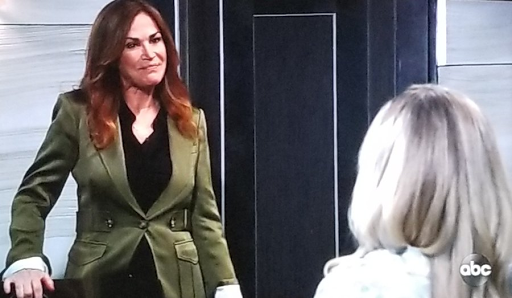 Jackie Templeton comes to town. Kim's had some Orange County Work done! Anyway, she's looking for Lulu. They sit and talk...Luke mention. They talk about Cyrus.

Anna says 230 ppl are coming to the wedding AND Finn's Dad and step mama. Finn says he'll ask Peter to be in the wedding ..GROSS!! Robert comes over.  He tells them about the Holly caper. Says she's "really dead now".  Then he says he knows Peter is not who he says he is. Anna goes to take a phone call. Finn and Robert argue.

Olivia talks to Monica about Ned and how she left.  She knows he mad at her.  When Ned comes home Olivia says he smells like a bar and where was he?

Carly goes to the Qs. Finds out about Michael asking Willow to adopt Wiley.  Michael takes a call. Willow and Carly talk about Willow's feelings for Wiley and maybe Michael. Willow agrees to adopt Wiley.

Brook is in Charlie's and Nik comes in. Says she can live at Wyndemere. Geesh, she gets all the offers of a place! Then Amy comes over. She and Brook and Maxie all knew each other in HS.

Dr. O says the 'countdown' to Peter's destruction has started!!! She also tells Dr. Kirk she wants Anna killed too. He's like NOPE I didn't sign up for this. She says too bad. OH The doctor is in love with her!! WHOOT!!

Ava and Ryan!! She tells  him Nikolas has "TWO hands" and knows how to use them LOL!!  He tells her that he knows about Julian and the whole Wiley story. He says Nelle mailed him a letter.  Ava's like: GULP. He says he wants weekly visits AND GOOD ONES or he'll tell Sonny. Then Nik storms in!

By kdmask - October 06, 2020
Email ThisBlogThis!Share to TwitterShare to FacebookShare to Pinterest