RAIN DELAYED THE GAME until tomorrow so.. new GH 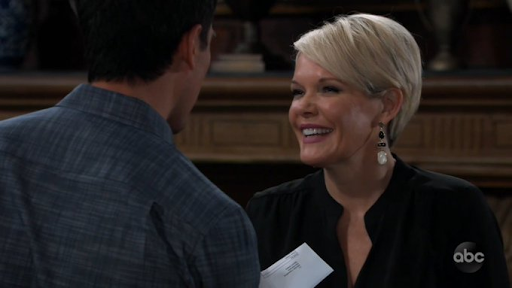 Nik and Ava in Wyndemere. Nik opens up a letter and says "How could you"?  OMG She spent $10K on bedding LOL. they banter and get all sexy. Talk about the cotton sheets at Sonny's cabin. I loves them. 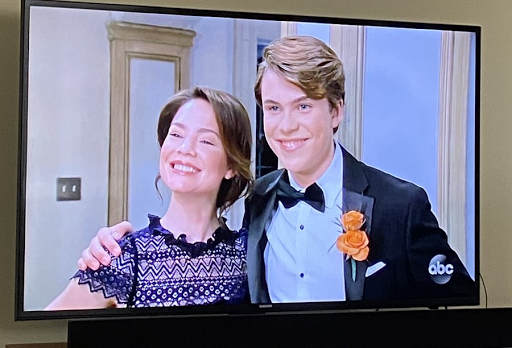 Everyone's at Jax's house. Liz, Carly, Brando, Portia to see the kids off to Homecoming. Aw, they all look so dapper! Taking photos ext. Oh, Nina and Jax are there too. Lots of people in one house!  Trina tells Cam he makes her feel safe. Carly tells Portia Nelle was found ON THE PENNSYLVANIA SIDE OF THE BORDER!

JaSam skulking around..following Cyrus. Jason says "I'm WORKING" ahahhaaha. Um, if both of you are out, who's got the kids?  They go into Charlies to talk to Cyrus.

Cyrus had his own goons arrested because he said they went after Brando "on their own". He's sending Brando a new car lift to says sorry. He's slick.  Cyrus then goes into Charlie's again to see Julian.  Sam talks to Julian. Cyrus tells Jason he's sorry Mike died. Jason gives him a dirty look

Homcoming on the Haunted Star. Joss and Dev talk on the deck. He says he doesn't think of her as his "cousin" anymore.  Joss leaves. LOL! Trina and Cam talk and she's too sad to be at the dance because of her Dad.

In the end  Cam and Joss kiss!!

END:
Ava gets a call from Ryan Chamberlain

By kdmask - October 01, 2020
Email ThisBlogThis!Share to TwitterShare to FacebookShare to Pinterest