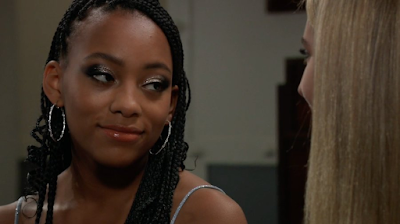 Dev sees Cam and Joss kiss.  Dev says "Did I interrupt anything". Man, he..is.. well. Has little energy. Dev tells Joss to go see Trina, she's upset. He says to Cam that he should only be friends with the girls. :eyeroll: "If you found Trina first, would you have kissed her"?

Aunt Stella tells Curtis and Jordan that TJ and Molly are having a protest at GH against Cyrus. Stella thinks that TJ needs therapy to deal with the kidnapping.

TJ and Molly are at the Metro planning the protest and their "commitment ceremony". TJ wants Brando to come to the protest. Brando says NO ...that guy is nasty! Stay away.  TJ wonders why Brando is being so dismissive to him. Molly flashes back to asking him to stay away from TJ>

Sonny and Jason on the Pier. Jason says he knows how to win the war against Cyrus. Says Cyrus is arrogant and thinks he can turn anyone on his side. Ergo, they'll use Brando as an undercover.. WHICH IS WHAT THE POLICE SHOULD DO but..whatever. Then Brando walks out.

Ava, Julian and Nikolas. Ava takes Ryan's call.  Ryan says he knows she loves him..yada yada and that she has to visit him because he has "life changing" news.  Julian tells her not to because he has enough to worry about. He leaves. Then, Ava goes off on Nikolas and basically says he and Ryan are cut from the same cloth. It was weird. They make up and she says he's not as bad as Ryan.  ;)

END: Ava goes to see Ryan. Ryan is on!

By kdmask - October 05, 2020
Email ThisBlogThis!Share to TwitterShare to FacebookShare to Pinterest