You know, the GMA 3 show before GH is about the best replacement so far in that spot. I wish they'd have a little Carla/Clinton "Chew" piece in there now and then but it's good. Since we don't get soaps, I'll take it. I like the team they have.

Curtis and Portia at GH. He's waiting for GH and she's taking a break. OF COURSE. They talk about Trina. He still feels badly about Taggs.  Then Portia and Jordan get into an argument about not brining Taggert's killer to justice. 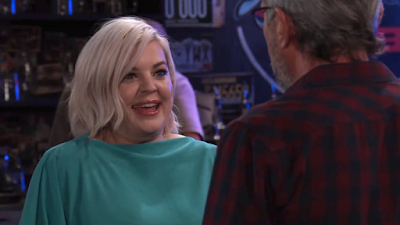 Mac is talking to Jackie at the Rib and she's telling him all about Robert's past. He's loving it. Robert walks in and shades the restaurant, says it used to be better. LOL . Maxie walks in. She recognizes Jackie because she's famous. Then she asks where Felicia is..Mac says she's feeding the elderly or something LOL. Maxie can't wait and blurts out she's getting married. Mac hugs her. Robert is NOT happy.  Mac goes to call Felicia, Robert and Jackie go to the bar. Maxie gets congratulated by Brando.

OMG Jackie mentions Frisco's band "Riff Raff" !!! LOL She and Robert talk, she wonders why he doesn't like Peter.

Peter's going to go see Anna. He tells her first about Maxie so I'm sure she chickens out.  She is so happy. He tells her the genetic tests come back negative. He mentions the Rheumatoid arthritis stuff. She says she doesn't have it. Then gets a look on her face (but aren't she and Alex identical twins??). Peter leaves and ANNA DOESN'T TELL HIM.

Peter then goes to the Floating Rib. Jackie tells him to congratulate Paxie. He tries but fails LOL

Cyrus meets Jordan and she gives him a PCPD file. He tells her to kill the motorcycle accident investigation.

Chase goes to Finn's office to ask him to have a dinner with Mom, Anna and he. Finn's like NO WAY. Chase is begging him.  Finn tells Chase about Alex. Valentin calls Chase about Sasha, says she needs a friend. Chase texts her. Then goes to find her.

Brook is going to have to "sing" and use Amy's voice instead--Lip Sync! Millie-Vanilli? LOL. So, she lip syncs and Amy's in the hall. Everything is going well until... Chase shows up (see below) and Amy drops the phone and they can hear the two talking in the hall!! ahahahaha RUT RO!! Chase finding her is great --remember "Man Landers"!!??  Amy comes out and tells the truth. Lady buyer gets mad-- leaves. Lucy fires Brook.

By kdmask - October 15, 2020
Email ThisBlogThis!Share to TwitterShare to FacebookShare to Pinterest