NOTE: I forgot to hit PUBLISH YESTERDAY-- I did write the blog tho. So, it's the next one down. SORRY!!

TODAY'S SHOW:
EpiGenetics--Anna talks to Finn about identical twins and inherited traits. She knows she doesn't have RA but maybe Alex does. Oh if you only watch one thing today WATCH THE VALENTIN and Anna scenes!! WOW, Valentin is like 'I KNOW THAT WASN'T YOU! You never would have slept with Faison!!" .. Oh they are good. I think Anna is going to DNA using Faison's brain?? She says he's dead but "not gone" .

Brook Lynn yells at Valentin. Valentin says she's responsible for her own wreck of a life. It was a weird scene.  Chase convinces her to go back home.

Dante can't walk in The Floating Rib.."too many people".  He leaves and goes to see Olivia! She opens the door and they hug. Aww. They talk about him getting out and his long beard. LOL . Dante is going to stay at the Q house!! HOORAY! I love everyone in the same house. 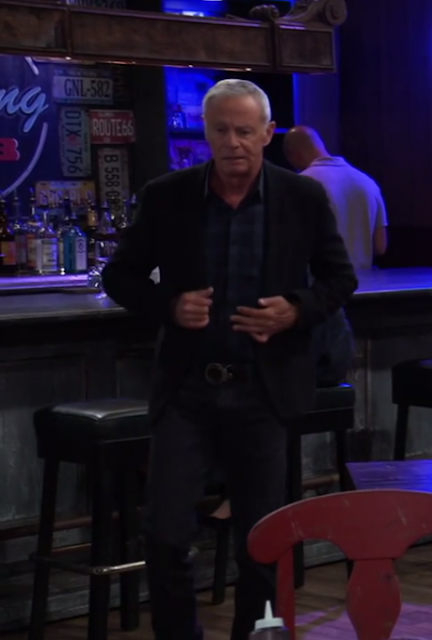 Peter and Jackie talk about her early reporting days. Robert says he is just protecting Maxie. She says you don't need to. Spinelli walks in... he's not happy they are getting married. Maxie yells at him. Oh she lays into him. She says she is having a baby with Peter and he'd better be happy for her. If not, she won't be his friend. Ouch.
Spinelli is fake apologizing to stay on the case and get the inside scoop on Peter.

CarSon goes thru Mike's stuff. Old pics of Sonny. Awww. OH! Sonny's worrying about getting Alzheimers! He says he can get tested. Carly's not sure he should.  She says they are not foolproof.

Cyrus meets with Brando. He tells him he got the PCPD to stop investigating him and Sonny doesn't care about him. Eventually, Brando goes to Sonny's to tell him Cyrus asked him to work for him. Sonny says "GOOD">

UNEVEN SHOW TODAY.  Kind of throwing everything under the sun at us.

By kdmask - October 15, 2020
Email ThisBlogThis!Share to TwitterShare to FacebookShare to Pinterest