Olivia: I could NEVER CHEAT ON YOU

SO! Jackie IS Chases' mama.. I'm saying ex-lover of FINN and he's not even looking at her LOL. OMG. Then Anna's like: Um, this is your STEP-MOTHER? Robert: YOUR STEPMOTHER?? ahahaaha. Jackie says "Hi Hamilton" ahahaha. She says "you broke your father's heart taking your mother's name". Anna pulls Robert away and he's like NO! It's just getting good! Chase and Finn's Dad isn't coming because he's dealing with his Lime Disease. Jackie calls Chase "Harry"!! GAH!
She and Robert talk about old times. She says that she is over what happened between them and is sorry about Holly.

GH: Epiphany and Britt tangle. It's awesome. She tells Epiphany to just do her job. And she's her boss. Jason tells Britt he knows that Cyrus is doing all of this. Britt has an epic BUN on!  She asks Jason if he went to Murder School ahahaha.  Jason wants HER to look at his chart and head injury (not sure why??)  OMG Great scenes. She has to give him a shot "Drop trough" she says LOL They banter a bit. She tells him her nicknames "The Britch".. "The Wicked Witch of the Westfall"

Stupid Sasha and Valentin. He's worried about her. She's like: Um, don't be. They talk about both being alone. Valentin leaves.  Sasha goes to Charlies.

Monica and Michael and Willow. Monica says they have to figure things out now that Nelle died. Then Tracy calls her. She leaves the room.  Willow talks about their boring ass'd relationship and what they should do next. Zzzzzzz Michael mentions divorce. They decide not to do anything now, she'll adopt Wiley and go from there. 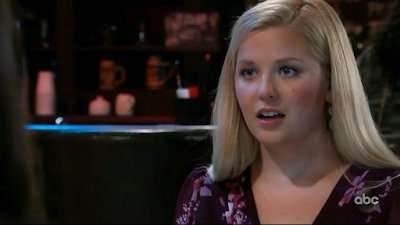 Amy and Brook. Brook wants Amy to record her song for Deception because her voice is shot. Amy says no. Oh, Brook wanted Amy to record it and they'd say it was Brook Lynn! Amy said she did that once with Man Landers and it was a horrible idea. She leaves. Monica comes in and tells Brook that Tracy called and thinks she should move back in home.

AMY then changes her mind about being the voice for Deception.

Chase will be Finn's best man.

By kdmask - October 07, 2020
Email ThisBlogThis!Share to TwitterShare to FacebookShare to Pinterest