You should have gotten a White Claw

So, here we are!! Reliving our youth!! So many things to unpack this week..it was crazy!! I felt like GH blew their entire 'extras' budget for the year!! Sets were full!! People were moving around!! Masks came off! Kids were throwing up! Drama in the House!

Grab anything but whiskey and coke.. that ish is not good for you!!

New Writing Team's name is up!! Dan and Chris! You know I'm a Chris fan and let's see if Dan can bring some new ideas. Shelley had written for a long time and I'm looking for some new injection into the show. I already feel like more characters are interacting on a more regular basis but that might be my imagination? 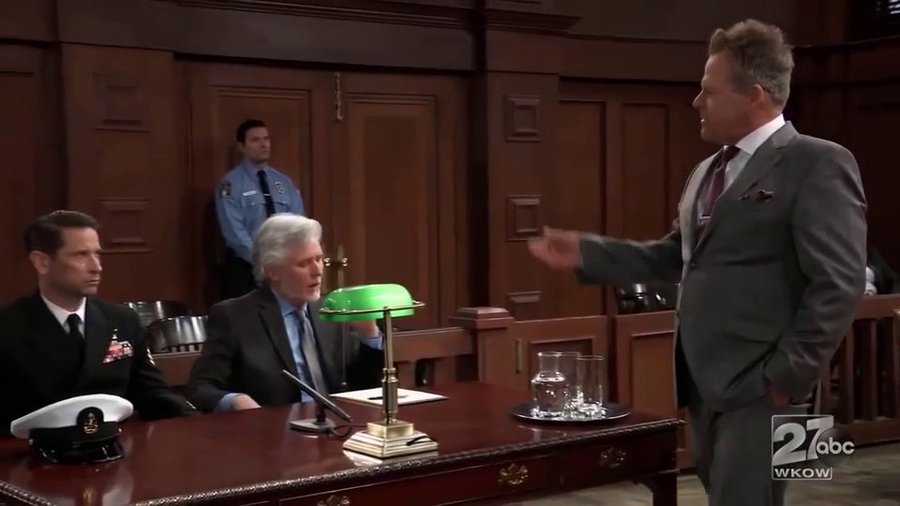 DECISION OF THE WEEK: The judge decided DrewCo is competent to make his own choices. She DID NOT "declare" he was Drew Cain (a big misconception). All she did was say, yep, based on the psych done, he can choose to have the procedure or not. Scotty blamed Kevin, Cam blamed Jason. Kim blamed Julian.  Liz is sad. Franco suddenly wants to stay in Port Charles and not run. (after weeks of wanting to  leave Port Charles and run). All I could think of was that song: Key Sara Sara Sara  "Whatever will be will be"... because this story? Time's up.

PSA OF THE WEEK:  Ok, ok, so the whole thing reads like An After School Special on drinking but--at least management let them do it!! These teens have been so squeaky clean, it's hurt!! I think maybe they let it be done since:
The kids got caught quickly
They got really sick
They'll probably not touch alcohol for forever after this

I wonder if Cam will have to pick up garbage for another year?? LOL 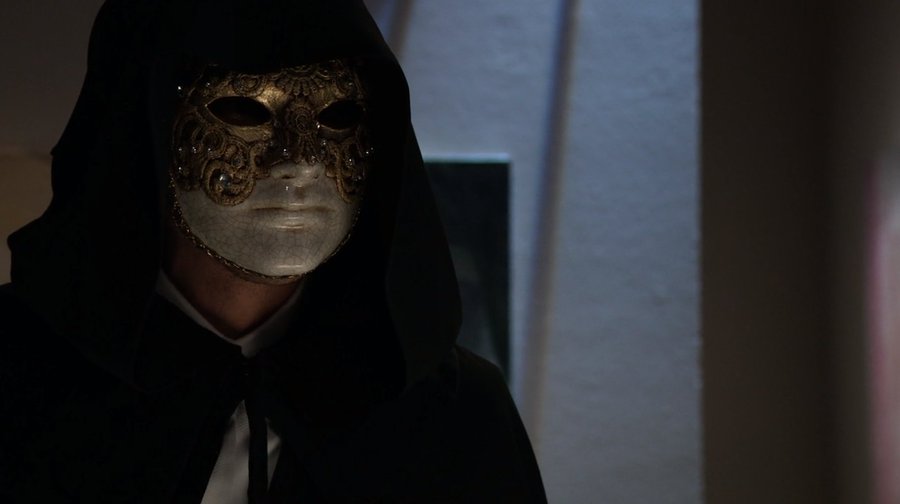 MASK OF THE WEEK:  So.. it's not a rubber face mask, it's a mask from  "Eyes Wide Shut" as Jenn pointed out on Twitter!!  At any rate, I was waiting for the 'surprise' like everyone else and it ended up being......

Nikolas! Some people were shook at how young he looked (ok, yes, me for one) but he's in his 40s and closer to Nik's "real age" than Tyler ever was. I will see how the actor does--what his chemistry is with others before giving my final seal of Wub-Approval.  Tyler would have been my first choice because I love origin-actors but that wasn't an option so... here we go. I do think the guy has that Cassadine "look".  He's been working with Hayden and Jax all this time and is after that codicil like everyone else. Although if he's alive, why does he need it?? 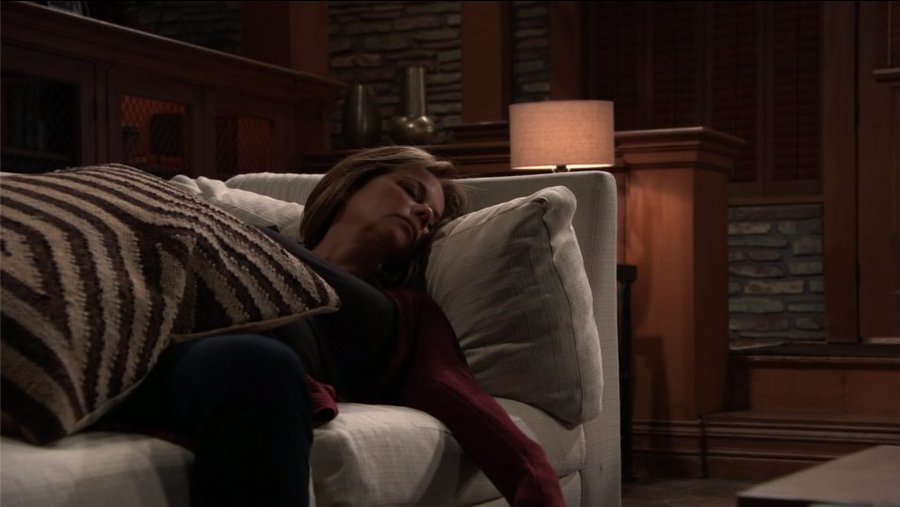 PASS OUT OF THE WEEK: Oh, Alexis is getting poisoned by Kendra--that I can tell by her palms, vomiting and numbness.  This is so anti-climax for me tho because we know she's not going to die. I'm over Trainer-Lady Kendra anyway. 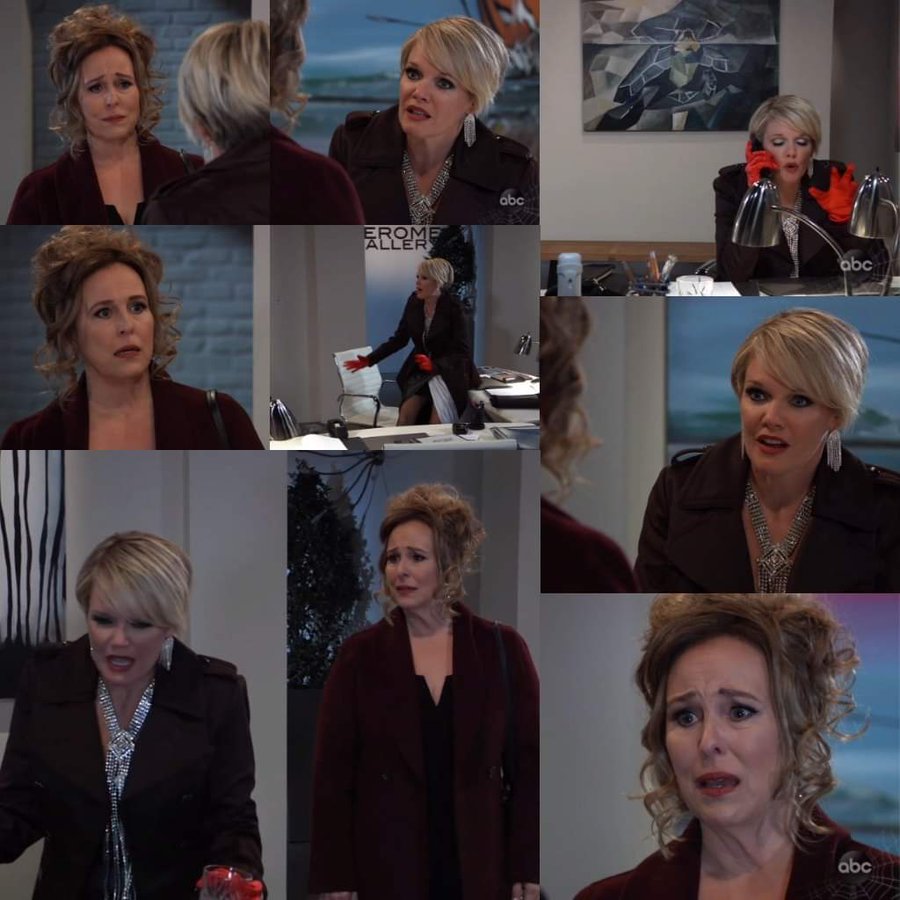 FOOL OF THE WEEK: (photo thx to @Cindy4419) ... Lucky, Luke...Ava , Holly, Robert, Anna, Jerry, Robin, Heather, her own MOTHER, Jake, Felicia, Frisco, Diego, Faison, Helena, Stavros, Stefan, Julian, Olivia Jerome, Brenda, Carly, Sonny, Jason, AJ... I COULD GO ON--but even HER OWN SELF was "DEAD" and Laura still didn't believe that Ava saw Nikolas??? Seriously? This was a huge flaw. I understand they were setting up Ava to look paranoid but COME THE HELL ON.  Ava should have said "look at me, look at you! Look at Julian!! We were ALL DEAD once!! No one thought we were alive either'!!  Then Ava goes to Shadybrook! Just like that!! What the ... :hands up: I don't even get it.

FRIEND ZONING OF THE WEEK:  Joss did it to Cam....and Dev did it to Trina!! What is up with Dev anyway? Is he into Cam? Someone brought that up on Twitter and I have to say, I'm intrigued. He could just be pining for "his cousin" and unable to give into his feelings because it would blow his cover but him being into Cam would be great. Could be the reason he left Turkey. If he's Muslim, it would make it even MORE intriguing but.. would GH go there? Hmmmmm..
I'd go for a Cam-Trina pairing by the way... 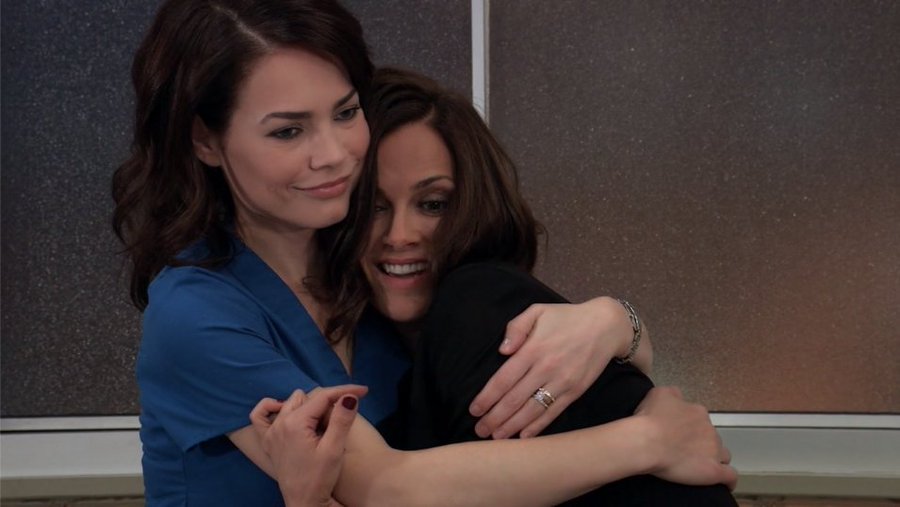 WUB LOVE OF THE WEEK: I can't even with these two!! LOVE them together and I was so happy Liz did't get in Hayden's face about Violet, she just enjoyed the moment.  RB better stick around. She adds a lot to the canvas and I do like ME with her as well. I want to see Anna and She and Finn all together!! 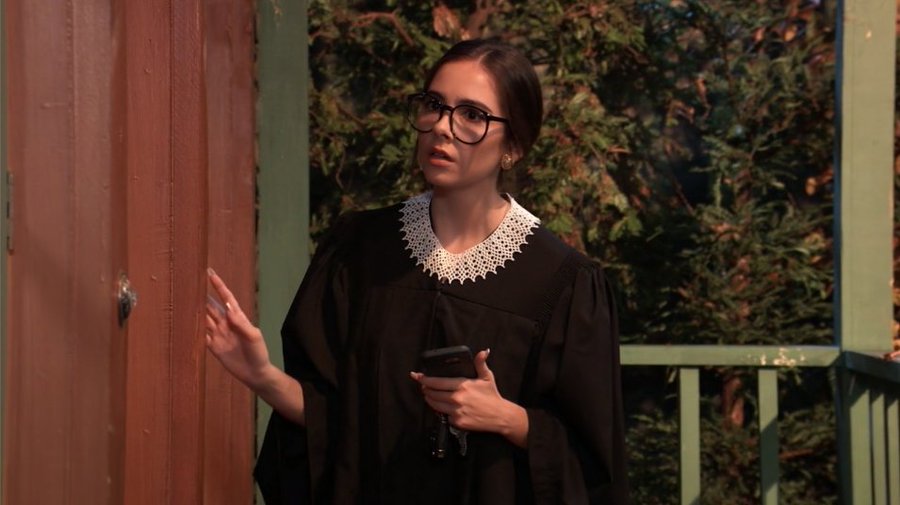 COSTUME OF THE WEEK: RBG!! And perfect for our Molly!! Did you see TJ wants to marry her?? He sure does. Stupid Jordan was all against it at first but in the end, gave her blessing. I'm over Jordan too--she can go. 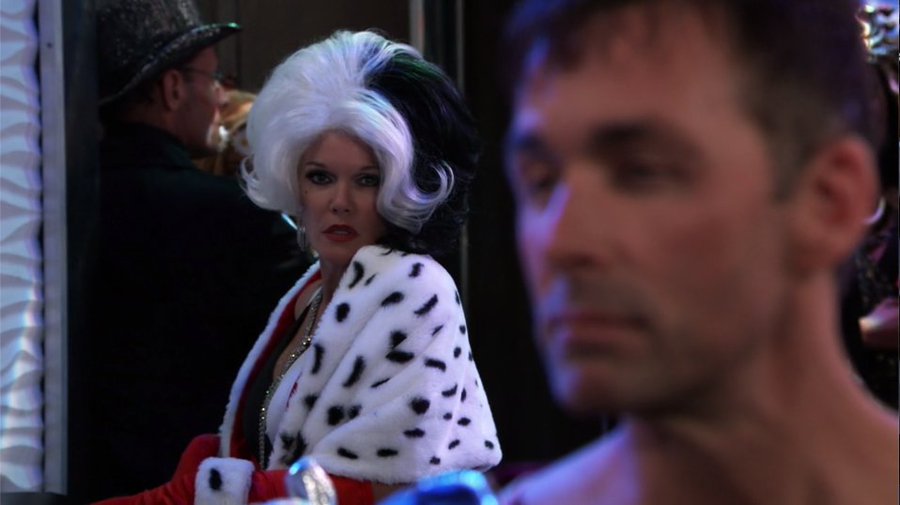 JUST BECAUSE I LOVE HIM OF THE WEEK: There's my Scotty!!

PROP OF THE WEEK: The protein powder in the dumpster was a close one but... this little guy placed at the Nurses' Station said to me someone is paying attention with the sets. It fits because it's a hospital and kids are around but it also is childhood--which Cam is obviously leaving. Sniff.

DrewCo is declared competent to make his own choices
Kim was acting even more unhinged and DrewCo started to notice
Halloween came-- we didn't see all the little kids but we did get the teens
Cameron spiked the Coke; he and Joss threw up
Julian is sending flowers and weenie pics to Brad to break up he and Lucas
Alexis is falling to the poison Kendra is giving her in her protein powder
Elizabeth found out she's an Auntie
Dev wants to be friends with Trina; Joss wants to be friends with Cam
Sam's in the clink with Cassandra as a bunk mate (she has a knife!)
Ava saw Nik, no one believed her and she checked herself in ShadyBrook
Jax and Hayden are working with Nikolas and knew he was alive.
The portrait is still in the Gallery
Nina's a bitch
Jordan wants TJ to "sow his oats" but finally gave her the blessing to ask Molly to marry him 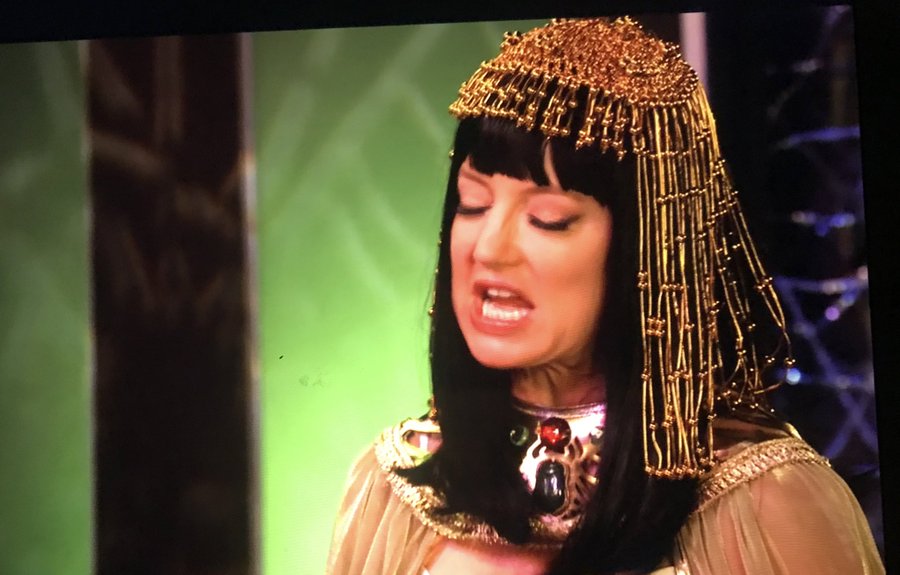 That's all I have right now. I hope you turned your clocks back because if you didn't you'll be confused when everything is closed when you go out.
I can't comment on Nikolas yet because I need to see him act with everyone. Yes, I would have liked Tyler back but that was not to be. Am I glad the character of Nikolas is home? If it means getting Valentin and Nina out... oh yep!! Plus I am hoping for some love for Ava. My girl needs it. 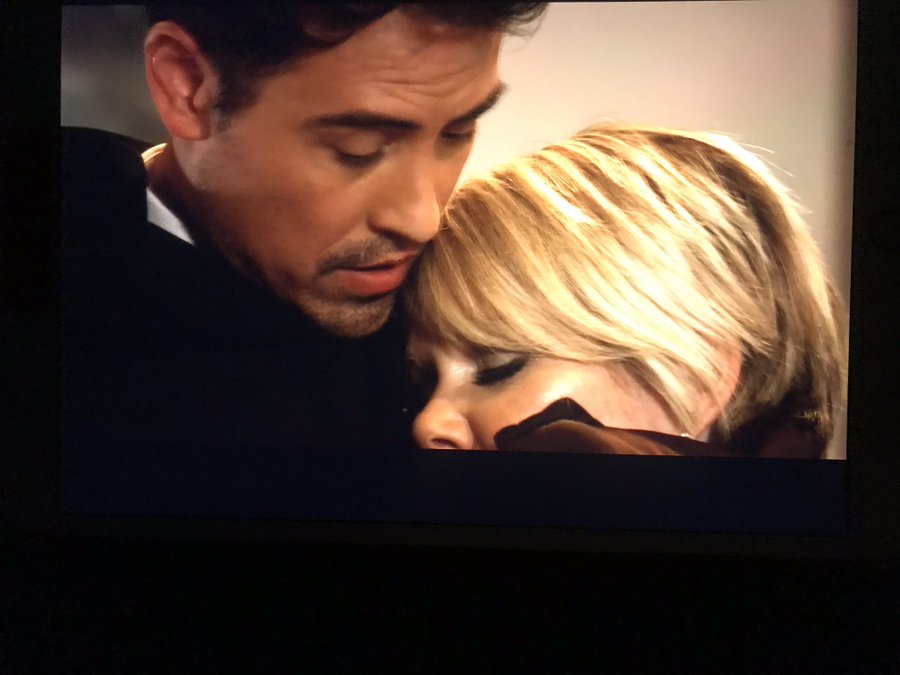 Next week is a BUSY  one for me. I will not be here Monday,  Tuesday or Thursday. I have to see a lady about my nose (plastic surgery revisit for my fall), hair cut and work. I'm sorry my life is getting away from GH at this moment!!

By kdmask - November 03, 2019
Email ThisBlogThis!Share to TwitterShare to FacebookShare to Pinterest