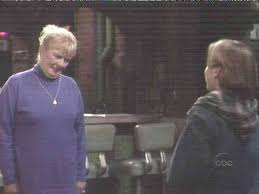 This scene is where Ruby met Lucky for the first time. (link below) Lucky was on the run from Frank Smith and took refuge in the diner. What I took from this scene is that after Ruby (Norma Connolly) met Lucky and realized he wasnt with his parents, she immediately went into a protective "mama bear" mode. She never talked down to lucky or treated him like a kid. She had a very calming presence to let Lucky know he was safe and she would protect him. I dont know if it was meant to come off that way, but that is how I saw it.

What a great lady she was! She was such a rock for so many people. When Ruby liked you, she would treat you like family and would give you the last penny in her pocket. (and a free cup of coffee). But if she didnt like you, boy, she let you know it. (She slapped Kevin once. Hard!) And she was big on finding the good in people, like Jagger and Liz after a bad first impression. She had a built-in "bs" detector and could see right through most people. She was gruff, but with a heart of gold.

Ruby was at home at the diner dispensing advice in her no-nonsense way. She lent a ear if you needed it (and sometimes if you didnt). She had a colorful background, coming from Florida with Bobbie and Luke, first as a prostitute and then as a madam. In PC, she worked at GH and then took over Kelly's.

Karen has often mentioned that Aunt Stella would be great as the new proprietor of Kelly's, and I always thought that would be a great idea. The show needs someone to dispense advice, handle exposition and move stories along smoothly. And Aunt Stella, though not a replacement, would be great at talking to everyone who came into the diner and giving people her opinion. (and boy does she have one)

Most of us have an Aunt Ruby in our lives. Someone who is not a blood relative, but we love like a family member. Who we look up to for advice and who love us unconditionally. The world needs more Aunt Rubys. 
This is the official "portal" for Friday's blog.

Jump right in and post and comment when you can today.
Have a great Friday everyone!
By delcodave - August 17, 2018
Email ThisBlogThis!Share to TwitterShare to FacebookShare to Pinterest