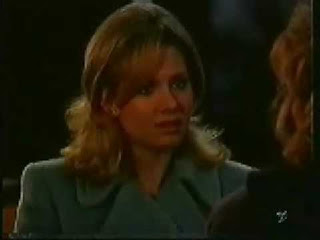 Recasts have always been hit or miss, whether it be on a soap, sitcom or a drama. GH has had its share of recasts, (Lucky, Nikolas, AJ, Frisco for a split second...). One of the most notable has been the character of Carly. Four actresses have played the role. Laura Wright, the current Carly has truly made this character her own. When Carly came to town, she was a vindictive, vengeful girl out for revenge against her mother (Bobbie). Now she is a strong woman and though she has her flaws, she has become a force to be reckoned with. Two of the actresses who played Carly returned to GH in different roles. And although I do enjoy what LW has brought to the role, I will never forget watching live - with no spoilers - the day that Carly squared off with Bobbie and fessed up to her lies and deceit. Sarah nailed the vulnerability in this scene, almost apologizing for all the hate she gave to Bobbie through her voice and mannerisms. And once she realized she wasn't going to get her way, she got defensive again. And Sarah was just perfection throughout. You never knew with Carly if she was manipulating you or if she was genuine. But it was Jackie Z who brought her A game to the table and owned it. She stayed somewhat reserved and “steely” and maintained composure in a scene where Bobbie could have otherwise really laid into Carly and gave her hell. The entire time Bobbie thought that this was just another one of Carly’s stunts until Virginia Benson confirmed it, and then you saw the terror on Bobbie’s face when she realized that Carly really was her daughter after all. This is one of GH’s most memorable scenes. Powerful writing in this scene as well as the acting. Its also a testament to the characters that were created that they are still on the show today and that they grew and evolved into a loving mother/daughter relationship.

PS. There are several links to the scenes. I'm listing the first two. You can just keep watching on Youtube to see everything. I ended up watching about 12 videos from this scene.

This is the official "portal" for Tuesday's blog.
Jump right in and post and comment when you can today.
Have a great Tuesday everyone!
By delcodave - August 14, 2018
Email ThisBlogThis!Share to TwitterShare to FacebookShare to Pinterest