Well, It was inevitable. My roller-coaster of a wild ride had to wind down and go into the calm zone at some point. The calendar page turned to November this week in Port Chuck and the aftermath of the chaos unfolded.

This week wasn't all cranked down. Naw, when Carly ends up in handcuffs, you know there was some excitement!

Let's eat that yummy breakfast that Nik and Britt left behind, shall we? I love Eggs Benedict!


**NOTE: I found it sad that Maxie's bday wasn't mentioned at. all. Lucas was even at Carly's with her. (SOMEONE had to tend Josslyn) --it was finally November 1st this week, but not until Thursday!

So, Larry Ashton convinces the Qs that he's crazy and drunk so they let him stay there. He is in fact, working for the Fluke contingent. We get a nice bit where he gets into bed with Monica and she reminds everyone that it's HER HOUSE. Patrick is inexplicably there too--he goes over on Halloween night (hell, Monica's in bed for godsakes) to ask about Fluke. Huh? Weird. I mean, call--Where's Emma? Oy.


So..Nina beaned Mommy on the head with a lamp. We see blood all over--she wakes up, passes out yada yada.I just needed to point out how FABULOUS Donna looks after all this trauma. She's on the floor in a pool of blood, had to go to the ER and yet her hair and make up are just perfect. Ah, the magic of TV.

Dante arrests Sonny-- Michael showed him mercy because he didn't want to turn into his father. Morgan pleaded for Sonny's life. (totally forgetting all the crap he did to him with Ava)! Dante was just DOIN' HIS job and Sonny was hauled off to the PCPD with half of Port Charles.

THE FOUR are trapped again when Franco plays a mind game; is there a bomb or isn't there? Heather knows the score--she runs for the door only to have the other idiots tie her up. Franco was bluffing and Dante and Nate burst in to let everyone go. Well, not Heather, she got hauled down to PCPD then Ferncliff. Shawn and Jordan hadn't had enough of that place and hung around to discuss "telling TJ the truth about his father". Yawn

Nina hallucinates Silas into her fantasy. Why Michael Easton didn't play this up is beyond me. He could have had a blast with it. Been coy or funny or SOMETHING--give some energy. Instead it was just blah-- it was a dream. Nina's still crazy as ever. Franco comes and takes her on a boat.

FINALLY IT'S THURSDAY...and November 1st!! Halloween is officially OVER!!

Franco takes Nina to Canada after Dr. O tells him the scoop about she and the baby. Isn't he a knight in shining armor?!  The cabin is pretty chic--complete with some natural stick decor, canvas' and that pack in play.

Welp! This happened! Michael looks as shocked as we are. Boy's got game! Not only did he sleep with Rosie, he did it multiple times AND Told Kiki he didn't GAF and to LEAVE. Like now. I actually loved how he told her she used him as a confidant when she was with Morgan, and Morgan one when she was with him. SO true....she loves the drama. Awesome--and Rosalie is a great character who hopefully has ties to someone in PC, or someone's enemy.

Alexis was hired by Lucy to defend Duke. Sonny begs her to reconsider but she says No. Duke is told to roll over on Sonny and refuses. What a bromance! It's not like Sonny would return the favor. Duke knows that American prisons are way better than Turkish anyway.  Alexis tells Sonny to call Diane. 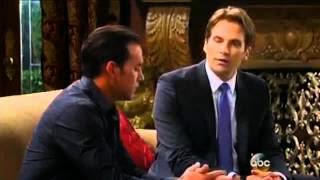 Federal Agent Kyle shows up to the Cassadine mansion just as Britt and Nik are eating their breakfast (or actually, not eating). They are getting frisky when he interrupts and starts asking questions. We find out the Justice Dept is investigating Anna and Robert for murdering Faison and need Britt's help. Not sure how she's going to do that? Wear a wire? Anyway, that's how that went. 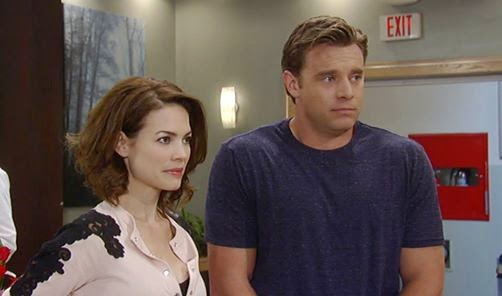 I need to talk about these two. Loving Billy Miller-- he's fun.  Still not sure why he came back as Jason 2.0 but it is what it is. He and Becky have nice chemistry. He's cute with Dr. O. That said, it's so overkill to have Liz be his personal usher 24/7. Not only that, he goes to her house where he finds a pic of his old face. Now, I am really trying to figure out why Liz had a photo of she and Jason up. Not her and Lucky? They should have had a family photo of her and the boys with both men.That would have made more sense. Do you think she'll have to buy Jake Face clothes? He doesn't have any right?
Yep, those are the things I think about at night!

SCENE OF THE WEEK: Maura nailed it. In someone else's hands this could have been way too over the top and sappy/crazy. She played it like a real Mama would. The trembling and the break down--not being able to breathe--all believable. Bravo. Bravo too for William DeVry for playing the 'straight man'...he also did a wonderful job.

FACE OF THE WEEK:  Sonny, trying to keep his sanity while one son arrests him, another defends him and another disowns him.  He actually kept his eyes shut for a few beats, letting the emotion of resignation sink in.

PROP OF THE WEEK: Was that a sandwich in there or a dirty diaper?  Lulu held it tenderly but also remembered to was her hands. I liked the fact that she and Olivia were doing "normal" stuff and watching TV.

HONORABLE MENTION: "Guza's Wall of Death" in the hospital where Jake stopped to look at photos. Almost every person up there was doomed by Guza.  Rick, Tony, Alan, Lila. The rest were regulated to recurring status or closet patrol.  Jake kind of remembered Alan but not quite

There you have it!  Carly, Duke and Sonny are in jail....Heather is off to Ferncliff, Franco and Nina are in Canada,  and Kiki and Michael are splitsville. Morgan loves his Mama and Papa again, Monica was in a scene with drunk Larry but not Jake and Julian will freeze his marrow for Danny-O.
Crowded House? Great Band. The Q's, PCPD's "Big House" and Liz' are all topped up.
By kdmask - November 16, 2014
Email ThisBlogThis!Share to TwitterShare to FacebookShare to Pinterest