So.. Ron Carliveti is indeed coming to GH once OLTL wraps up. This is good news for ME because you know I think OLTL is a great soap that uses ALL characters, doesn't block tape all the time and is exciting. I'm not sure GH will last much longer but hopefully if it DOES--it will be a great ride. 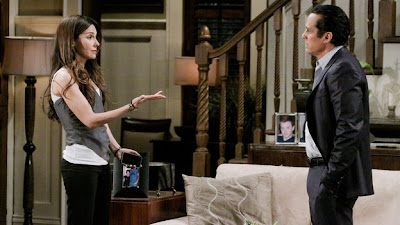 WHERE'S my SLEEVES?!
This week on GH was interesting, especially the lighter touches. I think Wolf gave Sam her little 'woman's lib' speech, don't you?! Also the Sexis stuff was grand. I think Nancy and Maurice did a lot of their own stuff. I even chuckled a bit.  Vanessa tweeted her last days from the set. You saw the photos I put up.  So, there's a year of Brenda Down the Drain.  Looks like she's going to get mad at Sonny for helping Carly win custody of Josslyn. Hmmmm..


Well, there is a lot of work to be done, we know that. Wolf has said "Sometimes they come back" and there's a rumor on Raven's page that JPL (Rex/OLTL) may be the recast for Dillion Q. Meaning, maybe the Q's will be back in business! He can get back Wally Kurth for me too! She also mentions a younger actress coming over but I have no clue which one. My JFP rumor is on there as well, we've both heard she's out.


New writers, new actors-- possibly new producer. Does this mean GH has a chance? At least a year.  Maybe a miracle will happen and it will be SO GOOD the ratings will go up to 5.0 again (ahahaha) and we'll be sitting pretty. I was thinking about product placement as a means to make money.  Think about it. Samsonite luggage for Carly to pack with-- Stoli Vodka at Jake's, Joss using Huggies. What the heck.

Jamey Giddens over On Daytime Confidential wonders if this is due, in part, to the Couric announcement. Hmmm, maybe so, but if you're not "in the net loop" you might not have even realized the impact that could have. Since they only count Nielson families, it COULD be the fact that GH is just plain dull right now. Vanessa Marcil announced her leaving as well-- many that tuned in for SnB are tired of being yanked around with people back and forth. This is NOT good news. Especially with GH's fate hanging in the balance. My other thought is (and yes, I'm saying it out loud)--will the actors jump ship knowing they have a 1 or 2 years left? Sad, sad situation.

Check out the new campaign to involve your cable providers SudzTV Not sure what I think about it yet, I need to take a look at it myself!

SCENE OF THE WEEK: Sexis on a Plane!!


New scoops are UP. Looks like Lulu's going to "Florida" where she meets one of the newbies, Javier. :rolleyes:
NEW POLL as well, another fun one--why not? And See who WON Best hair by only 50 votes.