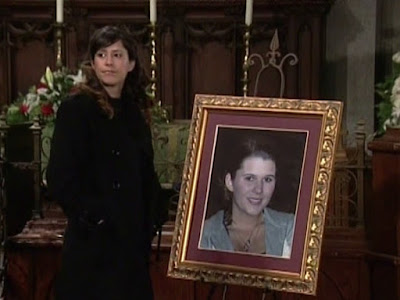 When the writers killed off Georgie, I always felt it was the worst killing the show has ever done. This was a major character, and a young one at that. Maxie was already abandoned by not one, but both her parents, and this was leaving Maxie in all accounts an orphan. There was an entire generation (late teens/early 20s) that was working together on the show that would have grown up to take over the canvas. We saw Georgie from birth to adolescence to adulthood. The path was set for her to become a doctor or some noble profession and meet and marry Harrison Chase.

I remember when this happened, it destroyed me. And now, 12 years later I am able to look back a little more objectively and with a different perspective.

If there is one plot device that brings out the best acting in a cast, it is a funeral. Lila's and Edward's both gave us great performances. Looking back on Georgie's funeral (I recently watched them) I was able to see some absolutely spot-on writing and wonderfully acted scenes. mainly from Kristen Storms as Maxie.

To start, Felicia has been off canvas for 4 years and left the girls in Mac's more than capable hands. Frisco has been gone for... who knows. I think he was written off a long time ago (by both the show and the fans). The writers could have easily made this a warm homecoming with Felicia, a beloved character coming home and giving comfort to a daughter who needed her mother. Instead, they had Maxie bitter and justifiably pissed and she laid into Felicia the minute she walked into the door.

Felicia: I came home as soon as I heard about Georgie.
Maxie: So, one of us had to die to get your attention? 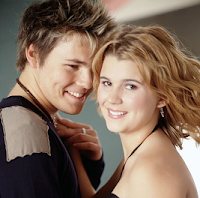 Kristen Storms gave a tour de force over the course of a two-parter. As people were coming to the house to see (Robin) or meet (Spinelli/Dillon) Felicia, Maxie was clearly getting more and more pissed at the attention people were giving to the absentee mother. You literally saw Maxie seething and her anger just building up. Sarcasm was always her strong suit.

Dillon was also off the canvas for awhile. He came home to surprise Georgie and ask her to go away with him. And he ran into Kelly's and was given the devastating news. I would be remiss not to comment on Scott Clifton's brilliant performance. He deserves all the Emmys he received in his life. 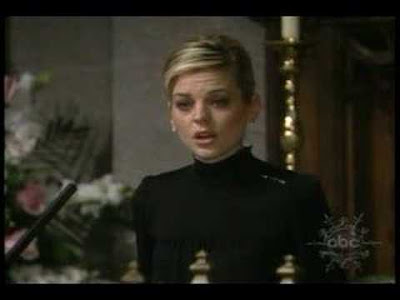 At the funeral, Maxie kept doing her slow burn against Felicia and was nice and reserved until she stepped to the pulpit and then tore her a new one. Absolutely destroyed Felicia and chased her out of the church. Great performance by both but especially Kristen. 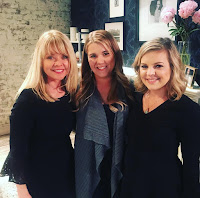 We knew that mother and daughter would eventually reconcile. How could they not? It also set the stage for Georgie to return as a ghost. A tacky plot point (if you ask me), but in this case, it always gave Maxie the courage that she needed during the most difficult points in her life. Something I think all of us need from time to time from our loved ones who passed on.

The death of Georgie brought out some of the absolute best performances by some of the best actors on the show. Don't believe me? Get on YouTube  and do a search. (I don' know how to embed videos, sorry. Just type GH Georgie Death Felicia Return). It also was an excuse to bring back two fan favorites, Felicia and Dillon.

I will always feel that Georgie's death was a misstep in the history of the show. I miss the character and the actress was absolutely the sweetest thing possible. But looking back now, it wasnt a total disaster. It changed some of the characters in Georgie's orbit and made them much stronger. And unlike other characters who leave and are never mentioned again, Georgie has been mentioned many times, returned as a force-ghost and also had a child named after her.

Georgie will always be with us in one form or another. 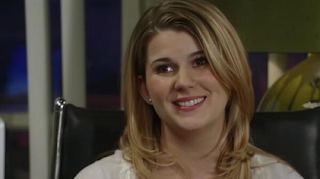 This is the blog for Tuesday. Please feel free to comment on the show and anything else.


By delcodave - September 10, 2019
Email ThisBlogThis!Share to TwitterShare to FacebookShare to Pinterest