Monte Carlo: Robert in a TUX! Olivia is thrilled to be on a "Spy Mission" lol She goes to order drinks while Robert walks around. A guy comes up to her, he's a part owner.. people were saying on  Twitter that he was on when Cassandra was. Olivia acts like it's her honeymoon with "Liam" and they could either get a new car or take a romantic trip. The owner seems to buy that story but not sure. 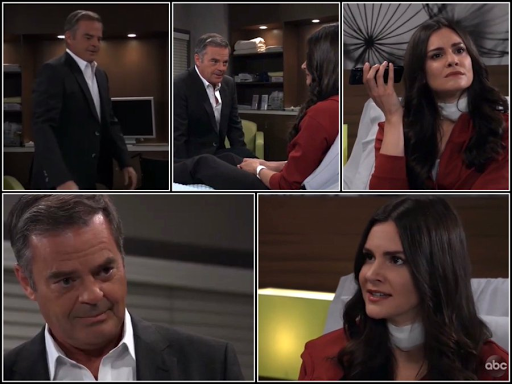 Brook Lynn hides Ned's phone with the message from Olivia on it. Then she tells Ned to get out of the room when Portia wants to read her test results.

Ned can't find his phone.  Brook erases the memo from Olivia. Chase comes in and asks about her voice. She says it's a 'process'.

Dante's Doc has news for him. He tells him Mike is dying. Dante is sad, talks about Mike a bit.  I was hoping he'd fly home. He thinks about life if Mike had lived and they were together. Mike tells him "not to hide from his family" .

Felix and Carly talk about Mike. Sonny tells Michael he can't take a break from Mike's bedside because they lost too much time before.  Felix comes in and tells Sonny he thinks Mike is comfortable. CarSon just sit with him. Mike's not moving much and you can hear that rattle breathing.
Carly daydreams about Mike, Sonny and Dante coming home from a Yankees Game. Then she has a dream where he's just talking to her. OMG, made me tear up. Sniff.

Ava calls Jules from the cabin. Says it's "glamping"... but creepy. Someone IS wandering around in the bushes. She's paranoid. The door opens and..she clunks NIKOLAS on the head lol. Nikolas says "I know Franco is here"! She laughs and says how dumb he is. THEY are SO SEXY! Ava says "I have more willpower in my little pinky that you do in your ENORMOUS..GIANT.. private plane"!! ahahaha OMG. They try to out seduce each other and they KISS !! well, COVID KISS !! hoorrayyy!! Sexy Scene !! they do have zex but off camera.

By kdmask - September 15, 2020
Email ThisBlogThis!Share to TwitterShare to FacebookShare to Pinterest