SO I caught up on yesterday's show. Sorry, had a Xanax hang over, couldn't deal.

Maxie and her heartbeat sound for stupid Peter. He's all Wow, nice, can't wait to be a Daddy. Like we ever even see James LOL

Jackie and Finn. Chase shows up. Shows her Violet. Oh, Jackie is leaving?? Hmmm...on a business trip and getting divorced? Oh. 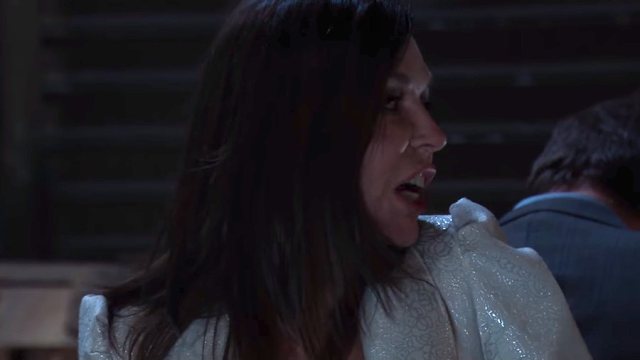 Anna and dumb Valentin who hesitated. Derp.  Anna should have plugged her in the forehead. She needs to watch a Tarintino movie.  OMG there's a crock POT!! If you watch Tik Tok..you'd be dead.

Ava trying to visit Ryan when Sonny's there lol whoops.  Sonny's going to be all tough guy and mess it up. AHHWEIEIA RYAN HAS A KNIFE IN HIS BACK? lol! wow!

Jordan tells Portia about TJ and Cyrus. AND about Taggs and she. Oh wait, Jordan fainted in front of Cyrus. Is this a plan of she and Portia's?

Dante ruined Lulu's interview LOL. The guy she was interviewing (one of Cyrus' thugs) leaves. Dante talks to her. You can tell he still loves her.

Alex talking to Paxie. She's fascinated by Peter. Maxie goes to the ladies room and Alex talks to Peter about his soul and how he really is and how they will be together forever. It's creepy as hell. Peter is like "It's like you're filling a void after all these years, saying what I want to hear". EEK. After she leaves, Maxie says "Was Anna a little off"??

Franco talking to Liz and getting all sad and he finally leaves.  Epiphany and Terry come in to visit. Epiphany needs a night out. They talk about the hospital and Liz mentions Franco. Terry gets really quiet.

Anna and Valentin trying to get out of the pressure cooker room.  Val has something in his back pocket.  Its' a cutter thing--then they get free and hobble out. Building blows up..they are ok.

Then Franco talks to Jason at the Rib. HE wants Jason to kill him!? Jason's like oh, fk off LOL

Robert goes to Finn's because Finn is worried about Anna. He shows Robert the envelope. Tells Robert about Anna and Valentin luring Alex out.

Jordan's fainting WAS A set up!! AH HA!! I'm telling you too Cyrus is so upset about Jordan. I think he still likes her. Ok, So, they are telling him that Jordan is having complications from her kidney. Jordan and Curtis are flying "out west" to find out about a house that Cyrus keeps sending money to every month.

END:
Robert finds Anna, she tells him about Alex

Finn is on the phone with Anna..when Alex walks in LOL

By kdmask - November 05, 2020
Email ThisBlogThis!Share to TwitterShare to FacebookShare to Pinterest